Ever get the feeling you've seen the same game twice? That was one of the feelings I had after this game, mostly because it was not that much different to the one I'd seen the night before (see the 'around the grounds' section for a roundup of that game).

The pitch was not in good condition. In fact it was probably the worst playing surface I'd seen all season, but more on that later. Actually, fuck it, let's digress two paragraphs into the report.

Oh, but when I write this stuff... 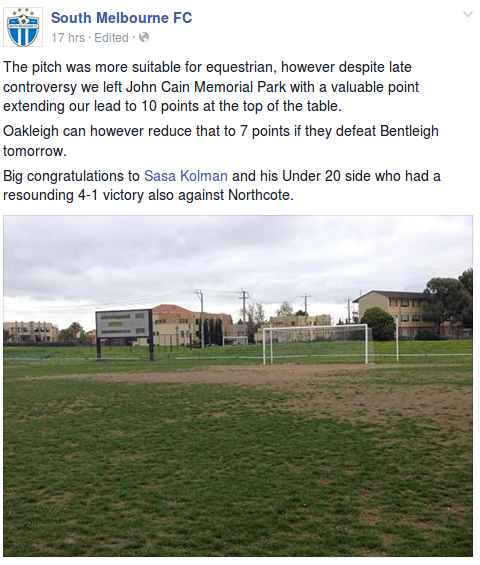 Kudos to whoever was running the official South Facebook page yesterday when the content on the right was posted.

While it's not like Northcote or any other club goes out of their way to present such a shocking surface for a game, the 'equestrian' backhander in this official piece of SMFC communication is nevertheless one small step for man, and one giant leap for bloggers who now know that their formerly unsanctioned pettiness may well end up having a professional outlet and maybe even a media pass. OK, maybe not a media pass.

Suffice to say that while more than one person who ventured out to John Cain mentioned that there was far more grass (and weeds, and clover) on the outer hills than on the playing arena, probably no one expected Pravda the South official site to come out and say something of this nature, especially since the Lakeside surface hasn't been in that great a condition itself in recent weeks.

And what credentials does whoever came up with the equestrian comment have to make that call? Ah, the questions that keep you up at night.

We now return you to your regularly scheduled programme
You make decisions all the time about how you're going to approach a game, and that goes for the fans as well. That's why I didn't rock up with an umbrella. Nevertheless I had decided on being one of the hardcore morons and not only standing on the outer, but also going behind the goals where we spent so many games during our relocation residency. Sure the city silhouette is pretty from the grandstand, the crossbar at the carpark end obscures the view something terrible and the rain made things miserable and cold and hard to see, but it's what you have to do sometimes to prove how big of a supporter you are. Also, you get closer to Clarendon Corner and their in joke chants.

Tim Mala was out due to getting five yellows, so Shaun Timmins moved over to right back while Brad Norton came back into the side in his once customary left back position. For them, Trent Rixon was a no show. The first half was crap. Nothing of any particular note happened. Oh wait, I bought a packet of B or C grade snakes from the nutseller, which helped keep the sugar levels up for a while, and when distributed to all manner of South folk at the game, they won me the fame and admiration of all who had the fortune of eating one. Well, at least for as long as the cheap flavouring lasted.

The second half saw us not only get on top, but also create several chances. We kept getting closer, but perhaps the ground made us wary of taking that first time shot, because we just kept waiting and waiting for the perfect opening instead of a good enough opening. Eventually Tyson Holmes slipped a ball through for Milos Lujic who tucked it away into the corner, and the crowd behind the goals went wild. Unfortunately not long afterwards calamitous defending from seemingly everyone in our back half led to Northcote equalising. I couldn't tell what happened or who was responsible, but we probably deserved to cop the goal just for the slapstick attempt at defending, especially the way Jason Saldaris was running from one end of the box to the other.

Was the foul in the box? Outside the box? Did the Northcote player trip over the ball? Did Norton get the ball? Was there a trailing leg, and should that matter? Saldaris guessed right, maybe even got a hand on to it, but it went in anyway. Northcote almost took the lead which would have been a criminal outcome, but instead we still had the best chances to win the game after that. Holmes sent a shot wide from a tight angle, and Lujic had too much time and ended up squandering a one on one chance.

On exiting the ground I found out that my earphones had carked it and I had to deal with stupid reality on the way home. Also, Oakleigh's 2-1 win over Bentleigh means the gap between us has closed to seven points with seven games to play.

Next week
Pascoe Vale away on Friday night. Yes, yes, I know, we're all mostly looking to the woodfired pizza. Three points? Not before I get a charcoaled crust on my margherita goddammit.

We had been scheduled to play Bentleigh on Tuesday, but that has been moved to Wednesday August 6th due to some reason or other.

Player Points tallies revealed! Maybe!
I like to give them a bit of stick when they deserve it, but on this front at least FFV have come through with the goods. Well, sort of. They've provided not only the tallies but also the breakdowns of each NPL and NPL1 squad player by player. Here then are the NPL squad tallies, and here are the NPL1 squad tallies.

If we are to take the documents at face value, then we are at the higher end of the NPL table, with 230 points used up from our available 275. By comparison our nearest competitor on the ladder, Oakleigh Cannons, have 235, but they have also used a marquee qualification on Nate Foster. Quite why we don't have a marquee allocation, I don't know.

Of more concern for us is that we have only two 'home grown' players, and they are goalkeeper Chris Maynard, who's only there as back up and not seeing any game time, and Dion Kirk who was added to the youth squad and then promoted through to the twenty man NPL senior squad to exploit a loophole which also saves him from being counted as a switching player. Andrew Kecojevic, at 16 years of age, is the only other player we have as deducting points from the overall tally.

It will be very interesting to see how this works from next year onwards, when switching players will accrue points from the start of the season as opposed to midway through this season, and when the players points cap starts falling (if it starts falling). Of course, there are those who have savaged the accuracy of this data set, claiming variously that it is:
In which case there's probably no point in worrying too much about whether any of the data means anything at all, other than how are we ever going to do this NPL thing the way it was sort of intended if we can't get one of its core elements even remotely right.

As for me, I'm now waiting with baited breath for the results of the facilities audit to be released.

You can't fire me, because I quit!
No more stats, as Steve from Broady - aka Big Griff - has either been made redundant or has quit in disgust for some reason. Of course, these only existed on this blog for the past season because of the fact that he was providing them for the club, but we'll still be sad that they'll no longer be a part of this site. As for Steve's media commitments on South Radio, I'm fairly certain he'll still be a part of that, as I've not heard otherwise.

Public transport changes
You may recall last week that I noted the change of the 112 tram to St Kilda - the tram that goes past Lakeside - has now changed and become a 12 tram to St Kilda. That was not the only change to the network though, with several routes having been changed. The only major changes I have been able to notice as relates to NPL people, is a change to Green Gully (which more or less leaves it at the same level of inconvenience) and Port Melbourne, which now requires you to take a different bus from a different location. Check our public transport guide for the relevant updates.

Around the grounds
The opposite of life is not death, it's indifference
Asked around, but no one seemed very interested in coming out to Port Melbourne vs Green Gully on Friday night. So it was just me and my soul crushing self--hatred and loneliness - and really, why else would someone choose to go to a game like this on their own? Gully had not much to play for, their annoying tendency to go on a barnstorming late run to another barely deserved title scuppered by the fact that in 2014 there will be no finals series. Port are trying to keep their heads above the relegation zone. The first half was a complete non event, so much so that even George, the well known bearded marshal at Port (also a big South fan) reckoned he was falling asleep. The second half was more worthwhile, as Port created several good chances and even took the lead. Sadly for the home team, Gully scored an equaliser late with what was probably their only real chance for the game. That's the way it ended, amid a brooding sense of irreversible decay; a small, disinterested crowd, a former commentator turned security guard, and the people at the gate not even bothering to hassle me about my FFV season pass as usually happens at Port.