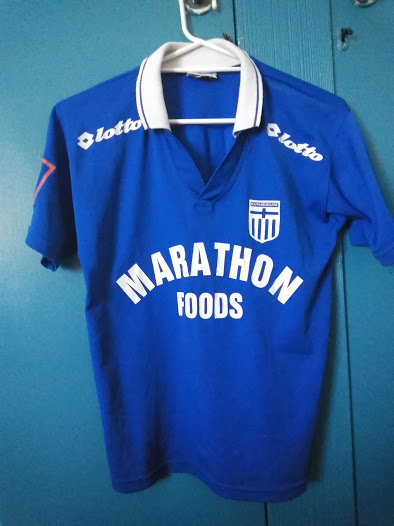 Many years ago, but not quite as many as I initially thought - just a tick over four years ago, so roughly some time in 2014 - Ned Negus, the son of broadcaster and former soccer administrator George, was giving away a whole bunch of jerseys he'd found at an old holiday house.

He made that announcement on Twitter, and I jumped in as quickly as I could hoping there would be something to do with South Melbourne. Now usually I'm quite late on these things whenever they become available, and someone has already snaffled up the good stuff - but on this occasion I was lucky - there was a South shirt amid Ned's collection.

The seeming catch was did I want to wear it or just own it, because the shirt was a small size - extra small in fact. Well, I didn't mind either way, and after sending Ned the due postage - he didn't ask for any payment above that - the shirt arrived at what was then Casa South of the Border, along with a kids size Newcastle Breakers jersey of a similar vintage to the South jersey.

For some reason I don't have a photo of that Breakers top, but no matter - I sent it away recently to Todd Giles, the amateur historian collecting Newcastle soccer history, who has been kind enough to share Newcastle vs South Melbourne related match programs with South of the Border, and thus also with this blog's audience. All part of an attempt at preserving soccer history, and keeping local soccer history local - well, at least more local than is often the case.
Posted by Paul at 13.2.19