That's the trouble with decisions: You make them and they don't seem to have any relevance to what happens next. That, of course, goes a long way to explaining why football is so popular. 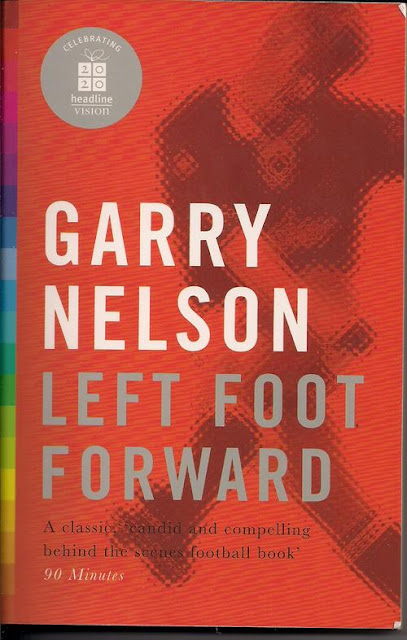 Left Foot Forward is a book from all the way back in 1995. It's a diary of the 1994/1995 English football season, as experienced by the forward/left winger Garry Nelson of Charlton Athletic, who were then in the second tier. Beginning during a family holiday in the United States and running through an entire season of mediocrity punctuated by the odd up and several downs, Left Foot Forward's mission is to show the punters out there what it's like to be a professional footballer of moderate ability in England.

Most will never play in the top division. The average length of a professional footballing career (at that point in time) is eight years. Wages in the second tier are above the average punter's, but not brilliant. And you're always one injury or red card or disagreement with a coach away from being thrown on the scrapheap.

At 34 going on 35, Nelson was near the end of his career, and during the book he is readying himself for the inevitable transition to life away from football. Unlike others, he's trying to get himself set up for that future, but knows it won't be easy. Still, he counts himself as one of the lucky ones, having been able to make a career out of football for 16 odd years.

Other players we encounter in the book are not so fortunate or forward thinking. Other older players haven't done that planning. Injury cuts others down in their prime. Scores of youngsters on the youth team get cut. As a PFA representative, Nelson tries to do his best to help out those players, but more often than not there is little he can do to overcome the egos of players - the youngsters think they're always going to make it - or the cost cutting of smaller clubs, or widening gap of the haves and have nots.

And while there are a lot of interesting moments in this book dealing with the mundane, workaday nature of being a professional footballer - the injuries, the bus trips, the commutes, training sessions, video sessions, recovery sessions, games in the reserves, long goal scoring droughts - the most interesting parts for me were those which dealt with the economics of football and Nelson's role as a union shop steward. As a snapshot of the professional game in Europe just before the onset of the Bosman Rule (Bosman's then ongoing case is discussed) and before the English Premier League really took off into the stratosphere as an entertainment product, this book is fascinating.

Nelson counts himself lucky to be at that point in time at a good and fair club, having been put through hell at some of his previous teams. Still, having lived through the transition of the Taylor Report and its mandating of all seater stadiums, and with free transfers just around the corner, Nelson is not overly optimistic for the future of the game. Some will get richer, but most will not. Job security will be flimsier. The fact that Nelson plays for a London club but finds it more economical to make a 90 minute commute says it all really.

Having said that, it's not all doom and gloom. Nelson loves the game, and loves playing the game. When things go right, when the team plays well, when luck runs your way, the game is a joy to experience. There is a camaraderie within the industry, though whether it's because Nelson is playing at non-elite level is hard to gauge. Nelson also has a knack for being completely wrong about big name player transfer of the time, and it's details like that (which will be appreciated by keener followers of English football than myself) that add a sense of levity.