Yesterday
As The Eels once noted, life is funny, but not haha funny.

Every now and again, it comes to a point like this. Even if you can see it in the distance though, it still usually manages to surprise you when it actually hits.

The day seemed to start innocuously enough. The small group that was at Clarendon Corner was visited by the head of security for the day, who had a brief chat about watching some of the language and stuff like that. Nothing untoward, no malice. 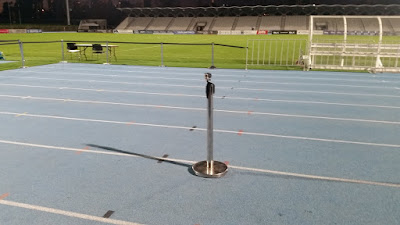 Then a State Sports Centres Trust employee came out and set up a go pro camera on the running track in front of Clarendon Corner in order to film Clarendon Corner, including it seems capturing audio. Clarendon Corner were upset at this seemingly unnecessary escalation, and moved across to the small bay closest to the 1926 Stand.

No amount of gimmick chants and songs can make up for being made to feel like a criminal at your 'own' home ground. All this of course after the Victory incident, where we weren't consulted about anything, got attacked.

While all this was happening, on the field we were already down 2-0 within ten minutes, a free kick from out wide not dealt with properly, followed up a by comical effort by Marcus Schroen who somehow dribbled backwards 30 metres towards midfield, lost the ball, and allowed Avondale an easy chance on goal. After having to fight and scrap for even basic possession against Northcote a week and a half before, the visitors must have been pinching themselves.

Fair to say the mood around the ground was at a low ebb. Personal circumstances meant that I wasn't at the home game against Port Melbourne in 2013 - Gus Tsolakis' last game in charge - but I can imagine that it bore at least some similarity in terms if the feeling of having reached a point of no return. When Nikola Roganovic was subbed off before halftime after coming off second best when coming off his line to collect a through ball, the day just got worse.

The worst part was that, despite imploding defensively for the umpteenth time this season, we still could have lead at the break. Poor finishing from an array of players kept the crowd interested, in that it was in some way conceivable that we may make a comeback, but Avondale's third goal put paid to that. Manolo came on and looked more dangerous than everyone else, and scored. That only served to infuriate, as Manolo's tenure at South has done, by asking again the obvious question of why the most skillful player in the squad is not getting a starting berth.

Morale across the club is stuffed. Iqi Jawadi was not even on the bench, adding heft to the rumour that he walked out of the club during the week. By their body language alone, several others seem to be coasting at best to the finish line, and that includes Chris Taylor. That doesn't even take into account increasingly persistent talk about change room schisms - which even if they aren't true, gather legs because of the disjointed performances of the team. Whatever naive hope I may have had that we could get to the end of the season in good enough shape to rebuild under Taylor and a core of players from this squad, while undertaking desperately need renewal, is gone.

While a surprise finals run is not out of the question - the intrinsic lottery of the finals means that just about anything can happen - one gets the feeling that we are rapidly coming to the end of the Chris Taylor era. It was fun while it lasted

Today
It doesn't seem so bad today. We're still third on the ladder. The antics by the SSCT bloke just seem absurd. Everything about yesterday seems absurd. Why were we singing 'Heal the World'? And how bad was that ref? Was the whole point of the exchange programme with the English refs to bring over people who are as bad as our refs? As for Iqi, is he really gone, or is there something else going on there? Can we really believe rumours about what goes on in the change rooms if it mostly comes from people who are anti this coach and several of the players? Is Manolo not getting a starting berth because CT hates him, or because Manolo is unfit?

Look, everyone's upset. Everyone just wants this season over one way or another. Let's try and enjoy what's left of it. Do most of you really have somewhere better to be? Don't answer that question.

Tomorrow
Tomorrow I'm going to see an animated documentary about a bloke who tried curing male infertility and impotency by performing transplants involving goat testicles. Puts all our problems in perspective doesn't it?

Next week
Melbourne Knights at home on Sunday afternoon.

The new normal
Meanwhile another match during this round was postponed ostensibly because one team can't control a small group of its supporters, and no one from the mainstream soccer press could give a toss.

Studs Up and South Melbourne match programmes
It's been awhile since I did a significant update on this front, so here's what's happened lately.

I have now scanned and uploaded what I assume is every edition of Studs Up, except for no. 34. Check them out in the library.

I also got through a small stack of South Melbourne match programmes, adding material mostly from 1996/97 onwards. Check them out in the usual place. Thanks again to The Agitator for lending me thus material. I also added the 'byes' in that section where they needed to go. Hooray for procrastination.

Around the grounds
Can't we just relegate all of them?
Out of all the teams fighting to get out of the relegation zone, who do we want gone the most? Some hate Richmond, because of their poor facilities. Others choose Northcote, for reasons I'm not entirely clear on anymore. Some (OK, me) hate Bulleen because of Monday nights in the middle of public transport nowhere. And then there's Port, with their blocked off outer side and tasteless souvs with pita containing the texture of a sponge. Even if Port get relegated, their main (only?) appeal for me will still be there - a convenient Friday night soccer option. Port of course shouldn't be in this mess - they may not have the league's strongest line up, but the team is still capable. They had four good chances in the first half - a Kearney shot from the edge of the box which hit the right hand post flush, with Griffin McMaster stranded; an off balance Stirton shot cleared off the line; another, more desperate line clearance by McMaster; and some other attempt I can't remember, but I swear it happened! Bulleen rarely ventured into its final third, which is a shame, because Port's defense looked rattled when they did. During a halftime conversation one observer, who happened to be a member of a rival club trying to avoid relegation, reckoned that there was a goal in this game somewhere; I reckoned there wasn't, and I was proven correct. The yelling coming from the Port bench as the game wore on indicates that the tension is mounting.