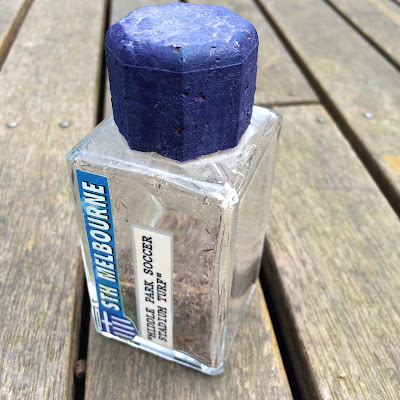 This week's handcrafted South Melbourne Hellas artefact - a jar of soil and turf taken from Middle Park Stadium after the final match there - comes courtesy of one of our readers, the 'Lakeside Spy'. Lakeside Spy had previously sent us a photo of one of his Philips Soccer League NSL plates, which we used for an artefact article earlier this year.

After I asked Lakeside Spy whether the club sold these items or whether they made it themselves - admittedly a naive question, but as an old teacher of mine who ended up working in the light department at Bunnings Altona North once said, 'ask a question, look like an idiot for three minutes; don't ask the question, be an idiot forever' - Lakeside Spy noted in correspondence with South of the Border:


The soil I did myself. It's a bit clumsy / amateurish but I still treasure it as a piece of history. As a lot of people did I walked on the ground after the last match played there. I scooped up a patch of grass sand/dirt with a small implement and put it into my jacket pocket. I'd also be fascinated to hear what other mementos fans took from the ground. I'm sure people connected with the Club also have some great items in their own private collections.

One doesn't doubt that there are some remarkable items out there - I read once on Facebook an account by someone claiming to have the sign from outside the old Middle Park Stadium car park - but for now let's embrace this piece of handcrafted nostalgia which reminds us of our spiritual home, and the reason we came to exist as we did. Here's hoping it encourages a few more people to share the artefacts in their collections.
Posted by Paul at 10.8.16