Metamorphosis (in a Robert Manne sort of way)

This is a guest post by one of South of the Border's most frequent contributors to the comments section, Savvas Tzionis. It's an interesting ramble about a very unorthodox journey towards, away from and finally back to South. Cheers, Savvas!

I grew up in Greek family with a Cypriot father who passed on down to me, not a love for soccer, but his passion for the Carlton Football Club, much like his own uncle passed on the passion to him when my father arrived in 1951 as a 17 year old (my father's uncle having arrived in the 1920s.) 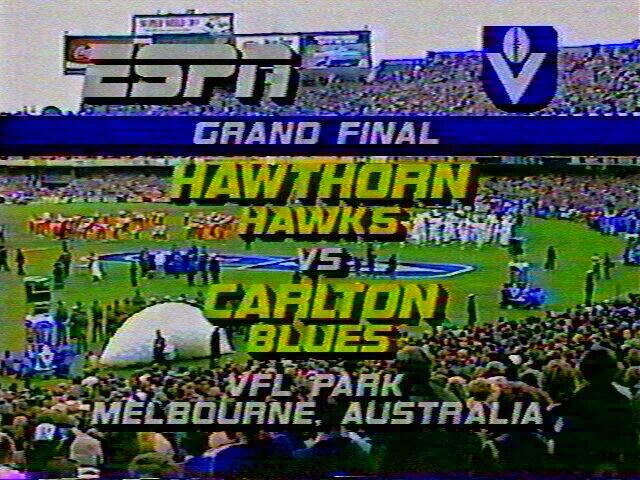 Soccer was, and has remained for him, a secondary sport. For me, the 1986 World Cup made a indelible impression on me. It councided with a nadir in the VFL, highlighted for me with the pre game entertainment at the 1986 grand final where John Elliott's Fosters Lager was horribly ubiquitous! Thus the journey began. South games, which I rarely attended, were now part of my ritual. For up to ten years from 1986 to 1994, both Australian rules and soccer were part of my diet, with Australian rules still the dominant partner.

Then in 1994, the once great game of Australian rules quite suddenly lost its aesthetic appeal, and soccer found itself number one. But, concurrently, I was also frustrated by the ethnocentric nature of the sport. The clubs seemed to be run by ultra-nationalists who had no interest in broadening the game's appeal.

I then moved to Sydney in 1998 for a year, and was fortunate enough to time my arrival with the introduction of the Northern Spirit. Those Friday night games were something else. I stood amongst the non official cheer squad (as opposed to the larger 'official' cheer squad on the opposite side), who were a motley group of English, Australian, and Southern Europeans. The English were the leaders, and rightly so, because they had the wittiest lines! It confirmed to me that we were not harnessing the latent interest in the game.

Once I returned to Melbourne, and in the wake of the missed 1997 Iran debacle which stifled the opportunity to grow the game, I drifted away from the sport to the point where I stopped going altogether. There were other external factors, but the deteriorating aura surrounding Australian soccer was of no interest to me. But when the Howard goverment was encouraged to enter the debate, I smelt a nasty rat.

I became a trolling internet soccer forum abuser, accusing the new regime of pseudo racism, and labelling its key element of change, the A-League, as the B (British and second rate!) League. I decided to attend Souths first game back in the State League against our erstwhile rival, Heidelberg. I didn't want to admit it, but it was such a sad affair, in spite of the large crowd, that I never went again (bar the odd Monday night game at Bulleen, near my home) until 2012 when I felt the urge to start attending South games again.

Why? Various reasons. My retreat from mainstream society was manifesting itself in various ways, and coming back to the Hellas fold was one of those ways. I also felt an urge to do my bit to hold on to a bit of the old Greek Australian society, and returning to Hellas was one way of doing this.

Throughout this metamorphosis, I look with chagrin to my attitude towards fans of our rival, Melbourne Knights. In the past, I saw them as the evil beast of Australian soccer; but now I grudgingly respect their steadfastness, and their realistic views of what many people think of 'ethnics', for want of a better word. Perhaps one factor is the modern history of Croatia being under a (albeit relatively benign) communist dictatorship, which engendered a mistrust in 'best intentions', very much a trait of over governance, which the FFA can be accused of.

My initial steps back into the fold were a little timid. My first game back was against the lowly, and destined to be relegated, Moreland Zebras. Interestingly it coincided with South Melbourne Hellas' return to Lakeside after the refurbishment. I barely knew the players. Looking back now, I chuckle that my earliest memory was of Kyle Joryeff scoring twice in that game. By mid season, he was gone! Although I had dived straight in and purchased a membership, I was only attending home games for the first two years. But from 2014, I found myself attending even early round cup games. I think the trigger was the chance to visit the old NSL grounds like Chaplin Reserve to see the once middle strength Sunshine Geirge Cross. I now knew every player (not easy with the high rotation of player lists, a marked, but understandable contrast to the NSL days.) and this was a key reconnection to the club.

My two most memorable matches during this time were the penultimate 2012 game against Bentleigh Greens which sealed our fate for that year, and the 2013 elimination final against Green Gully. Extreme disappointment, followed by an elation I hadn't felt since probably the 1991 NSL grand final. Where this new chapter will take me, is perhaps out of my hands. I would like to think the club, on the back of the return to the newly improved Lakeside Oval and the finalisation of the 40 year lease, has some real foundations in place for a return to better times. The team is finally back where it belongs on top, and I TRUST(!) the Social Club will be ready soon!

A couple of people who I would like to mention is the author of this blog, Paul, whose writings have been one of the reasons I have not only returned, but have taken it up a step, (to quote George Costanza from the Hamptons episode) in supporting South.

And to George, who I met through a mutual friend back in the early 1990's, on the terraces in the outer at Middle Park. Upon returning to SMH, I couldn't believe my eyes when I saw him at Lakeside, still attending, 15 years after I last saw him, still attending with his non driving father. His response to seeing me was akin to Mario from Mario's Pizza in the Frogger episode from Seinfeld ... 'Where've you been?!'