Back during the early part of 2010, I (along with Mr Valkanis, Steve from Broady, and a couple of other people) packed away (in a bit of a hurry I might add, and look how that worked out, sigh) stuff that was in the social club. A lot of this stuff will be familiar to you, my South Melbourne audience, but a lot of it won't. That's because it was often hidden or kept inside small office spaces or alcove rooms.

While the camera I used to document some of these items is not really up to the task, as is my skill as a photographer, I thought I may as well release an image or so a week, just for the sake of it. Hopefully by the time I run out of usable or interesting photos, we'll have our social club up and running, and we can all share in their glory. Over to you Ministers Delahunty and Guy.

For the most part, if the item itself is self-explanatory, I won't be adding too much in the way of elaboration. Chances are that I won't know much about a lot the objects anyway. Some times it won't even be social club objects, but stuff that was lying around all over the place, maybe even stuff that other people have posted on the net, so if you have a weird or unusual object you'd like to show off to the great South Melbourne public, give us a buzz. 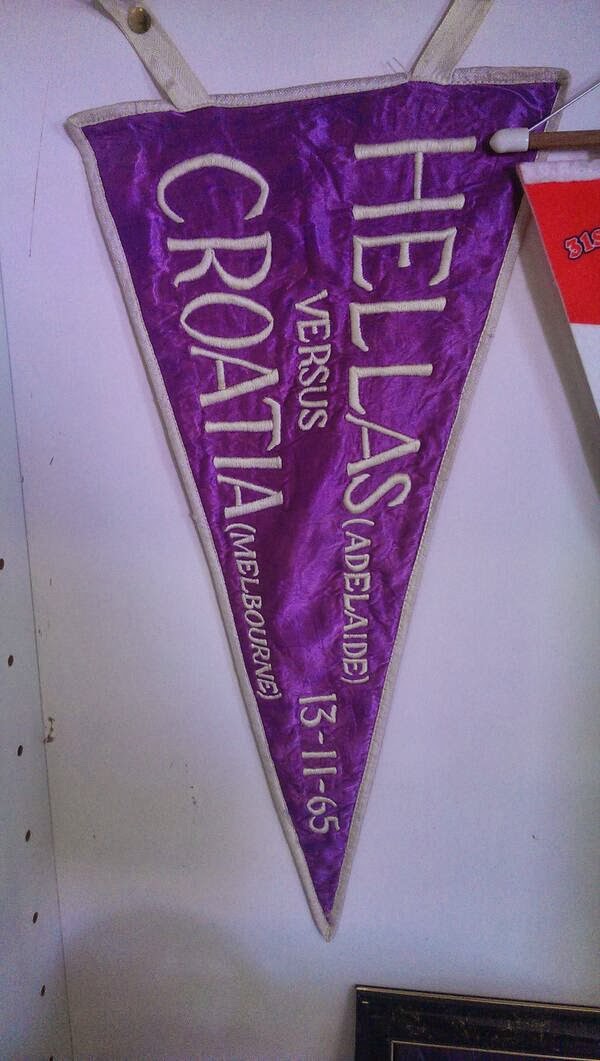 I was going to start off with another artefact, but in honour of West Adelaide Hellas' trip across to Victoria for the 3XY Cup, I've decided to go with this one instead.

In a box in one of the back rooms there was a lot of stuff, including a lot of pennants, usually as part of the custom of exchanging pennants after friendly or other matches.

Quite why we have a 1966 South Australian state league championship pennant (see above photo) I'm not sure, and I hope that it wasn't left behind by accident and that the West Adelaide people still have their own copy. 1966 was the year of West Adelaide's first state championship.

As an aside, the material and design bears at least some similarity to the pennant on the left, which I got from one Pave Jusup, a Melbourne Croatia committeeman, who put this up on his twitter feed. The provenance of it was unknown until one helpful West Adelaide person noted that it was from the Australia Cup (a tournament that we always seemed to underachieve in) - the tournament apparently being held at Hindmarsh stadium that year. Croatia probably qualified for the tournament by finishing as runner up in the Dockerty Cup that year to Slavia. But what was the score from this Australia Cup tie?

Update - West Adelaide - Croatia pennant mystery solved, properly this time.
This is where it pays off to do your due diligence in these matters, and for that I apologise. At least one of our regular readers was able to do the hard yards and set the record straight, and we thanks MelbCro for supplying the correct information as to the provenance of this article's second pennant.