Actual 2014 Soccer News (instead of history and books)

Hip, hip, hooray and all that.

I'll Swap You My Rixon Card, For Your Lujic Card
Well, there goes one of the worst kept secrets in the league, and I don't care what certain club apologists have to say. With Luke Hopper pretty much out the door already (visa issues), and with Trent Rixon back to Northcote, we needed a striker or two badly. So, now we have 2013's leading VPL scorer (from the championship winning team no less) and recently discarded Wellington Phoenix temp worker (ah, the perils of the increased casualisation of the workforce) Milos Lujic on our books.

I think that's an improvement, and it's in keeping with our 'Let's buy the cunts that fuck us up from teams that seem to have been doing OK over the past couple of seasons' policy (it's in our constitution, have a look yourself if you don't believe me), as well as our 'Juniors? What are juniors?' policy. So, who's going to partner Lujic up front? Or if we play only Lujic up front, who's going to replace him if he gets hurt? Baggio Yousif? He's gone to Hume. Nick Jacobs? We could always try Gianni De Nittis again. 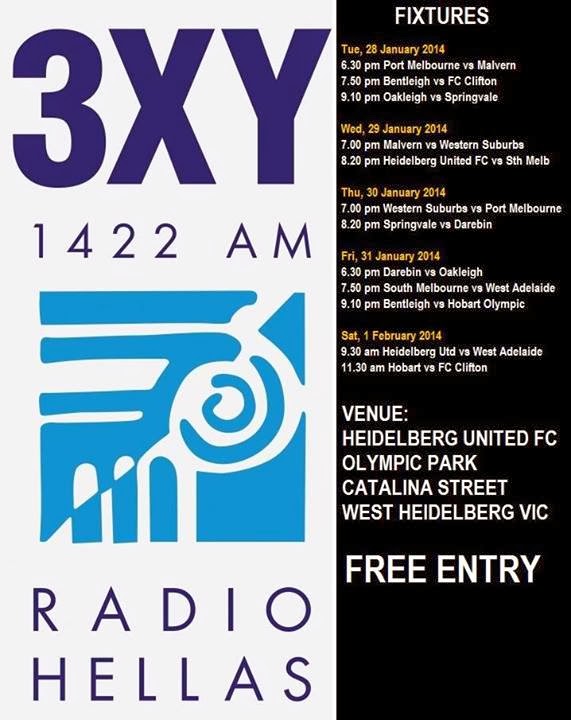 It's the Hellenic Cup for When You're Not Having a Hellenic Cup (or a Bouzis Cup)
A little while back we mentioned that Heidelberg were planning to have a pre-season tournament, with an assortment of Greek teams, including interstate ones. Well, while details were sketchy then (and for those of us who lived through its horror, we entertained the possibility of having it turn into the farce that was the Bouzis Cup), it looks like this is actually real, and brilliantly broadbased and compelling. Even better, it's sponsored by one of our favourite organisations, media or otherwise, 3XY Radio Hellas. Without looking too far ahead, if we win, they would have to mention it on their sports program, wouldn't they?

Anyway, it looks like it's four groups of three. From the VPL, Northcote is missing. The rumours of Sydney Olympic coming have turned out not to be true, as they'd probably (and rightly) prefer to take part in the NSWNPL pre-season tournament. In their place is Hobart Olympia, though I'm not sure how it will effect their supposed plans to play us.

But more interestingly, back from the grave is West Adelaide Hellas. If you thought (like I once did, before being set straight on the matter), that West Adelaide were dead following the 1999 NSL season, then are you in for a shock. The junior wing of the club survived, eventually re-establishing a senior team, and after many tough years has fought its way back into South Australia's top flight this year.

They've been placed in the competition's group of death along with ourselves and Heidelberg. Click the image for a bigger version, or head to the fixtures page on the blog for our group games. It's going to be a bit of a fucking hike in the middle of the week to that joint, and even the attempt to get home on a Friday night won't be pleasant, but at least it's free entry.

Random Dispatch From The Tenth Circle of Hell
Steve From Broady, back yesterday from his holiday down the coast, where I assume he spent most of his time impressing hot chicks with his radical/tubular/gnarly surfing moves, went down to training and had this to say.


Which is all well and good, except that I'm fucking well sick of hearing shit like that. I want them to look good on the field - and by look good I mean score a shitload of goals and strike the fear of (insert your preferred deity here) the hearts of the opposition.

Cool, We Just Saved Ourselves $9,000,000!
So, Melbourne Heart have been bought out. The minority stake (20%) by that Bart Campbell/Melbourne Storm dude, the other 80% by Manchester City. Cue all the jokes about Northern Spirit and Rangers.

New name, new colours, new logo. Goodbye Heart. Presumably goodbye wheelie bins. I'm taking this as a franchise that has folded and is being replaced by something else. If the wheelie bins aren't there, then as far as I'm concerned the very fabric of that organisation has ceased to exist. As one person noted on the interwebs (and which I'm stealing without his permission)


But maybe it's not up to me to decide. Just maybe, it's for the diminishing support of the Heart itself to make decisions on such things as perceptions of continuity and allegiance - that's if it is a decision, and not something felt, you know, in that now hollow cavity that used to hold their their, ahem, hearts (only time I'm using that joke).

So what I want to know now is, are they finally going to be the team for the south-eastern suburbs? The team for old soccer people? How much are the real Melbourne City from South Kingsville going to extort from the new owners for the name? Can we have two sky-blue teams in the A-League, or will that be too confusing for the children? Will supporters of other EPL franchises be put off supporting

And what of poor little South Melbourne? Have our dreams of a return to Australian top-flight glory just been shattered into a million tiny pieces, again? How many of our small remaining flock are about to run for the exits now that our national league ambitions have been denied twice in the space of a year? Oh the pain, the pain of it all!

See you at the games next week folks. Fuck I need to see something resembling soccer being played by a real team in blue*.

*that only fully adopted the colour in a mid-1960s change of, ahem, heart, lol, chuckle, snort. OK, I lied, and I used the same lame joke twice. You try being funny and innovative when it doesn't come natural to you.
Posted by Paul at 23.1.14