I can forgive the fatigue of three games in eight days, even though not every player out there on Sunday played in all three games. I can forgive the players for suffering under the yoke of some diabolical early refereeing (how did Krousoratis not get a free kick after his opponent tried to snap him in half?), though some of our own players - and the coach - really should be doing all they can to avoid nonsense yellow cards for dissent, time-wasting, and scuffles.

I can understand being disheartened after going behind to the league leader after matching them for forty minutes, in what was admittedly up to that point a pretty ordinary game without much football played for long stretches. But what happened after that was pure garbage. The second goal we conceded was completely fucked. You're 1-0 down, it's going to be the last play of the half, why you don't have every player in the box, why Pep Marafioti doesn't stay on the post and instead wanders into no man's land, and why doesn't Nikola move? Just mind-bogglingly shit. The header came from beyond the penalty spot, it didn't have much power, and yet instead of being cleared away all of a sudden we're 2-0 down and as far as I'm concerned, out of the game.

The rest you've probably already seen or heard about. A third goal conceded early in the second half, all part of the most dreadful, half-hearted 40 minutes of football you've ever seen. Thank goodness that Avondale also took their foot off the pedal, because if they hadn't we'd have lost this game by double the score or more. There was a five minute period late on where we had a couple of attempts on goal, and looked OK from corners, but that was it. Even with the commentary headphones on you could hear the bronx cheers from Clarendon Corner.

It will be interesting to see what the line-up will be next week with more or less a full-team (sans the injured Kostas Stratomitros) at our disposal. And that goes for Marcus Schroen and Nikola Roganovic as well - because while one doesn't want to single out any player for a below par performance, because everyone lowered their colours - these two above all seemed to put in flat-footed, awkward performances not befitting their status as senior players.

Sophomore album blues
Being on the live commentary for a second consecutive week was less enjoyable this week, if only because one had to maintain a professional veneer and remember to praise the opposition as well. Had your correspondent been in his customary position in Row H, he may have been able to vent a little more.

Now that I think about it...
My commentary gimmick should have been to call Avondale "Avondale Heights".

Next game
Kingston at home on Sunday. The kind of game we really should be winning, but we'll see I suppose. 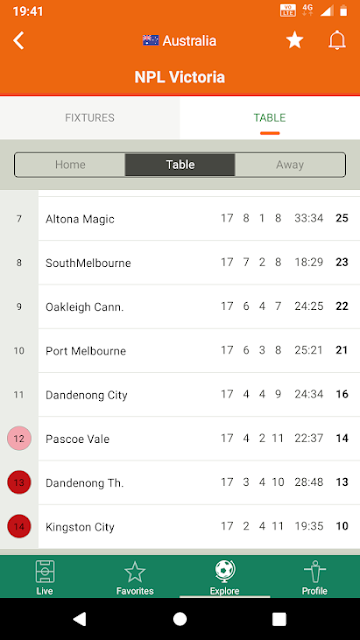 Relegation battle (status: ongoing, stable, approaching a fork in the road)
All things considered - including the likelihood, now realised, that we weren't going to get a point off Avondale - this was a pretty good week for us on the relegation front.

The only really negative thing is that Kingston couldn't get a point off Oakleigh, but since I had little doubt even before their form reversal that Oakleigh would sort itself out, perhaps it's better that Kingston lost, lest the Reds manufacture some sort of recovery (probably starting against us).

Dandenong Thunder choked hard, coughing up a 2-0 lead to lose 3-2 - let's leave aside for now whatever points punishment they may receive for last Saturday's shenanigans. Pascoe Vale got crunched by Port. Dandy City only drew with Gully. And as bad as our goal difference is, the teams in the bottom four spots are all worse off than us in this regard.

If some of you are still holding on to the finals fantasy, well, good for you. I'll be happy to join if and only if the next two weeks goes well.

Women hovering in that mid-table sweet-spot
Yes! I finally got to see a senior women's match after such a long time; of clashes, impossible to get to venues, of enjoying the Collingwood bandwagon before it sputters out sooner rather than later. I watched the first half of the women's game against the lowly Bayside United from inside the scoreboard operations room; which is to say, I saw bits and pieces of the game because the seating arrangements in that room are not exactly conducive to watching the action unless you're in the hot seat. I did see our first and only goal for the first half, as well as Sofia Sakalis' penalty hit the upright and go across the face of goal.

Later I decided to get a souv in the social club, and watched the second half from in there. The game turned into a procession, with South adding four more goals and showing that there's great disparity between these two sides, despite South's incredibly young team and whatever other results they had between them earlier this season. It's remarkable that in a ten team competition that there would be five kinds of club. Calder, the runaway leader and favourite for the title. Then there are the two teams behind Calder, who might be able to knock off the ladder leader on a once off, winner takes all game. Then there's the three or so clubs looking to sneak into the finals even though there's little chance of them doing any damage. Another three clubs just killing time. And Southern United, with a goal difference of -146.

Basically, we're in that sneak into the finals group, relying on taking care of business against the NPLW's dregs, and making sure to win the balance of the games against Box Hill and Heidelberg.

Around the grounds
Karpeh (oh no, please no, don't do it) Diem (damn you to hell)
Ralph Reserve. Third last (I think) Western Suburbs hosting (probably last) Altona East. Jerry Karpeh, playing for East, had an eventful game. Karpeh booked about 20 minutes in for persistent backchat. Half an hour in he was asked to put black tape on his socks because they had too much white. About 40 minutes in he scored the opening goal of the game, bundling home a goal from a long free kick that fell out the back of the Suburbs defence - important timing as Suburbs had just started to get on top. And with about 15 minutes to go, he cut back a ball across the six yard box that the Suburbs defenders thought had gone out, which was bundled in for 2-0 and the game. He also cocked up 2-3 more very gettable chances. Suburbs had enough of the ball and territory, but in general struggled to create meaningful chances until they were 2-0 down. They had a 15 second goalmouth scramble at 0-0, and hit the post at 1-0 down. I think both sides had a man sent off late for off the ball stupidity. A good day out, except for getting thorns in my hands while retrieving a ball that had got stuck in a cactus.

Final thought
Two Indonesians at Hellas! There goes the neighbourhood.
Posted by Paul at 18.6.19