The Bold and the Hellas - South Melbourne 4 Dandenong Thunder 0 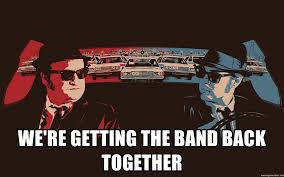 After Saturday night's results, there was not much sleep to be had. While nominally a good result for us, in that they took points off each other, the draw between Northcote and Hume saw us drop down into the relegation slots. Even worse, Kingston pulled their finger out against a lacklustre Avondale, and jumped up a few spots at our expense. So there we were on Saturday night, and into Sunday, sitting in second last spot, with a game in hand, but nothing else to latch on to.

Then when you rock up to a game and you hear so many different squad and lineup configurations that you have no idea what's real and what isn't, that doesn't fill you with any confidence either. No Matthew Foschini seemed pretty certain, he being suspended with five yellows. No Schroen (still suspended) and no Jawadi (still injured) was also something to bank on. But what of everyone else?

Previously, word on the street was that Milos Lujic had made his one appearance in between serving his five match suspension and leaving for Russia, so we were going to see Ndumba Makeche start... no! Milos was due to start, and Makeche on the bench. Jerrad Tyson was meant to be off to India, having received an offer too good to refuse to play there. He would be replaced by Zaim Zeneli (currently of promotion to NPL2 hunting North Sunshine) and/or Nikola Roganovic (currently or recently filling in at Richmond), except Tyson started this game and who knows for sure when he'll go exactly and who will replace him.

There were reputed doubts about Brad Norton';s fitness for the match, but that rumour was at least put to bed when he told me that he would be playing. But the surprises kept coming. Kristian Konstantinidis was reputedly struggling with personal issues, and likely to start on the bench, replaced in the starting lineup by... Tim Mala! Well, that turned out to be half true. KK started the game and played most of it, and Timmy Mala came on later on.

Such "getting the gang back together" shenanigans smacked of the end of Golden Gordon or every hokey American sports movie you can think of - minus the reformed outsider delinquent. Actually, speaking of reformed outsider delinquents, what of the People's Champ? He didn't play last week. He was gone from the club. He was, finally, a former South Melbourne player. Except that didn't happen. Somehow, through the reputed magical intervention of mediation, new coaching assistant (or something like that) Con Tangalakis, and a team bonding barbecue(?!), everything was sorted out well enough that everyone's *redacted* player was back in the staring lineup.

No doubt this whole situation has been handled incredibly poorly for so many years by so many parties, but having tolerated it for long enough until it finally broke of its own volition, everyone immediately concerned could have at least come up with a more creative way of doing things. For instance, would it not have been better for the club to make an announcement that Nick Epifano had left Lakeside, only to be replaced by a new player (El Boyo Loco or whatever) from "parts unknown", wearing a mask or some sort of disguise, who would play brilliantly over the course of the second half of the season, before finally revealing his true identity for the purposes of finally going over with his face-turn or, even better, going for a monster-heel double-down. Look, we're in the entertainment business, and I'm just trying to help.

If you wanted even more surprises, there was no Christos "Patrida" Intzidis in the starting lineup, with the returning-from-Scandinavia Luke Adams taking his place in central defence, and surprisingly perhaps Intzidis not even used in the role of defensive midfield. With Luke Pavlou departed, and Foschini suspended, that role was taken up by... Oliver Minatel! Oliver Mintael, reputed winger who's barely played on the wing (his apparent preferred position) due to the injury and suspension situation of the club. Oliver Minatel, who even when he has played as a winger, has showed little. Oliver Minatel, whose almost entire worth to the club thus far has been four goals of varying degrees of novelty value.

And yet, he was actually quite good in the role. I'm not going to go over the top and say that it was a transformative experience - he could be found out next week for all we know - but for this game it worked well enough. Minatel seems to read the game well, but more importantly, being in that position meant he was in the game a lot more whether he liked it or not. (And for whatever it's worth, he did apparently volunteer for the role). Being much more in the game rather than being stranded up front or out wide meant that he was able to influence a game in ways that he has not been able to do so previously in 2018.

The sputtering at best midfield of last week became a lot more fluid as well, the new jelling with the old in promising ways, albeit mostly from counter-attacks. Again, small sample size and all that, but we were counter-attacking well and smoothly, transitioning quickly from defence to attack. Of course counter attacking is much easier to do when a) you have a lead and b) you have a lead in part because you haven't conceded after seven seconds. It was probably just an accident that the scoreboard didn't kick in properly until about 15 seconds into the game.

So yes, going ahead early makes the opposition have to come out and chase the game and therefore makes counter attacking easier, at least in theory. What was astonishing about the early lead we took is that the Dandenong player didn't get a yellow card for that vicious tackle but also, considering how our season has been going, that Milos Lujic didn't miss the penalty. Indeed, he put it right into the top corner. The second goal was a good finish from the People's Champ after being released on the break. The third goal, almost unseen, came from a short corner, and thus I'm not comfortable with it being counted in the first half tally.

Three-nil at the break would suggest we were all over Thunder, but that was not quite the case. It was a far more free-flowing, end-to-end, and much more competitive affair than that. Thunder probably struggled to create as many clear cut chances as we were doing, but they could've scored, and had they done so you wonder how the game would've gone, what with our penchant for rapid self-immolation this year. Thankfully, that never came about. We only added one more goal in the second half, Ndumba Makeche tucking away an easy back post chance, and everybody was happy to get out of this game with all three points, and out of the relegation zone.

It was a terrifying 18 or so hours in the red zone - and there's no guarantees that we won't be back there again soon - but the wash up of the win on Sunday was that we actually distanced ourselves ever so slightly from two members of the chasing pack. What's more, we got ourselves back into positive goal difference, which in dire situations like this, is worth a half a point by itself. Oh, and there seemed to be renewed effort and desire in the squad. No one's sure if that newfound lust for battle will last the first test of true adversity, but it was exciting to have it back for at least 90 minutes.

Next game
Oakleigh at home on Saturday evening. For those who concern themselves with such triviliaties, it will be Chris Taylor's first game at Lakeside since his sacking, and his first game back after his mid-season trip to Europe. Of course, it is also worth noting that after the game, the social club will be screening the Socceroos vs France World Cup match, for which he club has said you will need to book tables for if you wish to sit down and watch the game instead of stand - that's $50 per head, and you get meal platters, etc. It's also worth noting that rather than the under 20s curtain raiser, our NPLW side will be playing against Alamein, with kickoff at 2:30PM.

Shortlist shenanigans
Those hoping for closure on the matter of the A-League expansion process will have to wait a couple more days at least. Today was the day - yes, I know it's a public holiday, but this is Australian soccer after all - where there was meant to be an announcement of the shortlist for the A-League expansion hopefuls.

No decision on A-League expansion short list for at least a couple more days. Have been told Deloittes went back with few more Q’s to the groups. So they are waiting for some replies.
— Ray Gatt (@Gatty54) June 11, 2018

That kind of make-it-up-as-you-go-along approach is of course remarkably reassuring, as are rumours that the licence fee will be $15 million. Not that any of that matters. 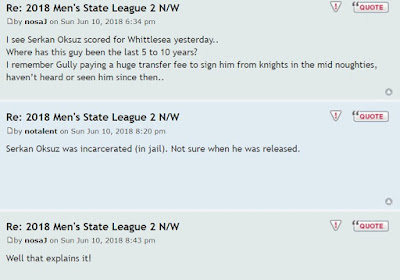 Around the grounds
...and if you're in jail, break out!!!
As promised to no one in particular last week, I headed north across the wrong side of the tracks to the catch up game between Westgate and Whittlesea United. Yes, Tansel Baser was there for the visitors, but that mattered not when Westgate opened the scoring after two minutes. But then Whittlesea took the game by the scruff of the neck, scoring three goals in the next 20 minutes. The pick of the bunch was the equaliser, which was a solo effort with the player in question dribbling past three or four opponents and slotting his goal just inside the post. Considering the usual standard of this league, it wasn't just beautiful, but transcendent, a distillation of everything good about football. At 3-1 it looked like Whittlesea were going to run away with it, but the first half settled down after that. After halftime Westgate were much improved, but they were wasteful in front of goal. They got one back, which made the game really interesting, but that's all they got.

Final thought
Safe travels to all those heading to Russia for the World Cup.
Posted by Paul at 11.6.18