Ticketing details for the FFA Cup semi-final have finally been released by the club, or at least an email has gone out to those who are social club members. The pricing structure is as follows: 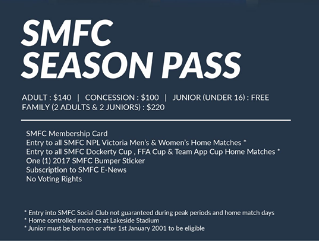 This pricing structure of course is absolute bollocks. A slap in the face for all members, whether they are social club members or season ticket holders, who are being asked to pay for something that they were already. There is no way of getting around it - we were promised as part of our membership entry into all club controlled FFA Cup matches at Lakeside Stadium, and yet here we are being charged $10 (plus a booking fee if you pay online, lol).

It was bad enough when they pulled this kind of stunt during the finals series, and then had president Leo Athanasakis try to provide specious reasoning to justify it at the information meeting held afterwards, but this blatant thievery is a joke. Of course most people will pay it because the event is maybe a once in a blue moon affair, and that's what the club and the people making these decisions are banking on. Goodness knows the financial mess that must exist in the background for the club to be trying to gouge those who turn up week in, week out for even more. 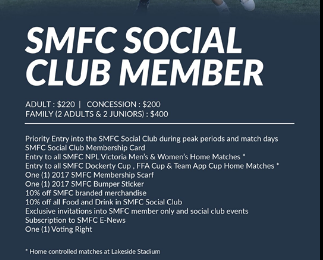 Now of course if they hadn't included these games in the package, or specified that games from the round of 32 onward weren't included, I doubt you would've heard a peep from anyone, and people would've been fine paying ten bucks to get in. But since it's there in blue and white that these games are meant to be included, I would just absolutely love to see what kind of pathetic reasoning those behind this pricing structure use to justify it.

On another matter, while I noted in a recent statement that I was in favour of non-members being gouged as much as possible, the $25 charge for adult non-members is still strange. The minimum charge as set by FFA is $20, and considering the big talking done by some of our club reps with regards to our A-League bid and 'filling out the joint' (not that any of that matters), wouldn't they want to make the pricing scheme for those people as attractive as possible? Look, maybe I'll be wrong and people in their several thousands will pay $25 for the privilege of coming back to Lakeside after missing out on the the last 13 seasons or maybe 20 seasons, rationalising perhaps on the one hand that that's what they pay for (at a minimum, and it's probably more) for a seat at the A-League at the Bubbledome, and on the other hand that a penance rate of $1.92 per season (for 13 seasons) or the bargain basement rate of $1.20 for twenty seasons is well worth the price.

Indeed, there's an idea, although who knows how you'd implement it: charging people varying rates based upon how many years since they've been away from the club. Impractical as that is, I suppose we can hope that at the very least that those once in a lifetime bandwagon jumpers end up paying their $25 and end up being situated on the concrete terraces a million miles behind the goals because all 5,500 odd seats have been taken up.

Those who are eligible only for general admission tickets should check out smfc.com.au from Tuesday for more details about how to purchase tickets. Keep in mind also that the club has stipulated that social club members and South in Business Coterie guests will enter through the social club. The 1959 social club will be open from 5pm on match day.
Posted by Paul at 2.10.17