Way back in the mists of time, the NSL was still dead, but the A-League had not yet officially begun. In those days, there was much weeping and gnashing of teeth, as well as trepidation - and anticipation - of what the A-League would bring.

Many people had chosen sides, while a lot of other people hedged their bets. In amid the clamouring, there were many op-eds. and roving reporters, and prognostications. Would it work? Would the tribes be united?

In Melbourne, this situation was probably more heated than anywhere else; one can speculate in their own time why that might have been.

Come to think of it, that seems a lot like the present, too. 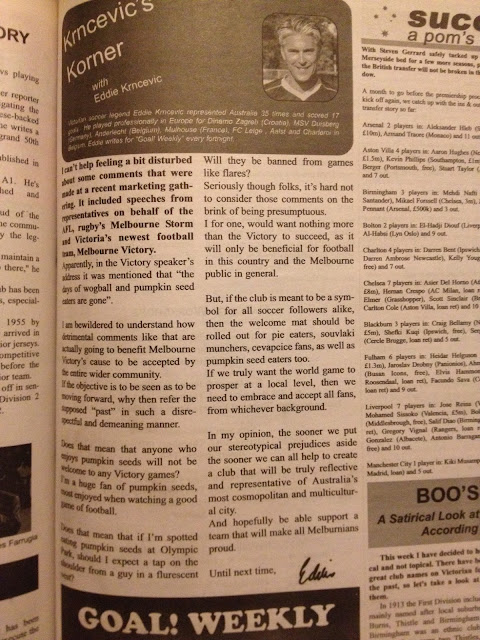 One of the most contentious (relatively speaking) comments made during that time was often attributed to then Melbourne Victory majority (or was he outright? Doesn't matter.) owner Geoff Lord.

He was accused of calling the old soccer guard 'pumpkin seed eaters'.

Of course, later on the phrase 'pumpkin seed eaters' would be taken up by a podcast of the same name, one which others enjoyed more than myself.

Then, as the arguments for and against got stale, and as 'three years tops' became many more, the phrase slipped out of the Australian soccer lexicon.

But what was the context for that statement? How did people come to hear of this utterance? That seemed to get lost in the wash somewhat.

The answer lies, at least partly, in this week's artefact. In the Wednesday July 13th 2005 edition of Goal Weekly (remember print journalism, kiddies?), in Eddie Krncevic's 'Krncevic's Korner' segment - why did I think it was Krncevic's Krunchlines? - where Eddie opines on said incident.

Right off the bat, Krncevic makes it clear he didn't hear the comments made himself, nor does he name the person involved. And while Krncevic is concerned at the offence caused, he doesn't see it as a deal-breaker by any stretch of the imagination, only more of a misstep that should not be repeated if Victory and the A-League were to succeed in Melbourne.

Of course, as with many of these kinds of 'outrages', though they were heartfelt by many of those who were listening at the time, the fact of the matter was that most weren't - just as today most Australian soccer followers or participants have no idea of the debates being had on Twitter and the remaining forums and blogs.

Besides which, as was noted by a member of the Victory forum at the time, even one of the blokes who sold pumpkin seeds at Lakeside ended up outside Victory games anyway.
Posted by Paul at 12.7.17