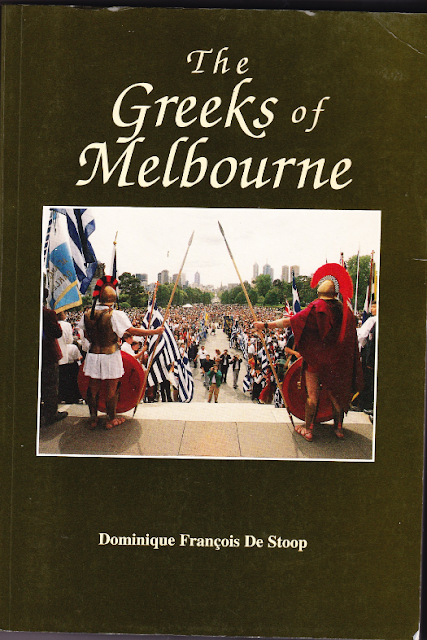 Well, lest one think that because  we spoke earlier in the week about one South Melbourne Hellas president that we have some sort of perverse agenda against our current nightmarish regime, here is a short piece which spreads the love to a despotic and nightmarish regime of an earlier, more innocent time.

Some time last year I think it was, while sitting on the outside tables at the Limerick Arms because we didn't have a social club at the time, that frequent artefact provider to South of the Border known as The Agitator lent us this book called The Greeks of Melbourne (published 1996) that he'd found in an op shop somewhere. Maybe it was even the Sacred Heart Mission shop just down the road from the pub. Clarendon Street's good like that.

The book is by someone named Dominique Francois De Stoop (who according to their own bio on the back had a very colourful career) which is not a very Greek name no matter how you try and spin it, and is unusual on that front for the fact that it's not a Greek writing this book because it's usually our deal to spin crap about how great we are.

Rather than going back and identifying every Greek that has ever done anything in Melbourne, the book msotly seems focused on contemporary Greek identities from all walks of life, and my goodness there are a lot of obscure people in there who happened to hit the jackpot by timing their burst of mediocre prominence to co-exist with the compilation of this book. Which is not to cast aspersions on any single one of those lucky souls, because soon enough the same will happen to this South of the Border correspondent in an upcoming book, and we'll all be the poorer for the experience and entertainment this fleeting bit of non-fame will provide.

For the record, here are the other names included in the sport section. Carlton footballer Ang Christou; his team mate Anthony Koutoufides; tennis player; Mark Philippoussis; super marathon runner Yiannis Kouros; taekwondo champion Lydia Zykkas; and er, Arthur Euriniadis, CEO of Collingwood Warriors. That not one Greek soccer player is included is perhaps interesting - maybe there were none good enough, or considered high profile enough - and instead we get two administrators to represent local Greek soccer.

The relevant biographical segment begins by noting that Vasilopoulos was the manager of a local bank branch, which is an extraordinarily dull thing to note except when you recall that so many slurs directed at the management of ethnic soccer clubs from those who mocked our capabilities focused on the 'fact' that our clubs were run by fish 'n chip shop owners, milk bar proprietors, and greengrocers. First, as if there is anything wrong with those kinds of people running a club at any level; second, in our case it just wasn't true. Surely the more important thing would be that the people running the joint were not out of their depth, and not their origins? Besides which, soccer in Victoria and probably across the country is so much more dependent on the health and wellbeing of the construction industry than anything else.

Oh, but what commentary on our club in that brief space allocated to it. Vasilopoulos claims that the club had 3,500 paying members and expected to have 10,000 members by the year 2000. I am amazed by these assertions on so many levels. There is of course the 3,500 claim, because popular legend has it that our record was 2,700 at some point in the early 2000s. Then you have the ambition to reach 10,000, which just seems out of this world.

But take note also of the expectation that the club's new facilities would be a key factor in attracting new members, and what may otherwise come across as merely an obscure oddball comment suddenly has a kind of relevance to our present situation. After all, has not Bill Papastergiadis of our A-League bid team made similar comments about our club currently having 6,500 members? Does the club not hope that the people who will come to use our futsal court will in time come to our games, and in turn become South supporters? Sometimes it seems as if time is neither a straight line nor a circle, but rather just us sitting on the same spot forever. I'm sure some notable physicist has proven that to be the case anyway.
Posted by Paul at 19.7.17