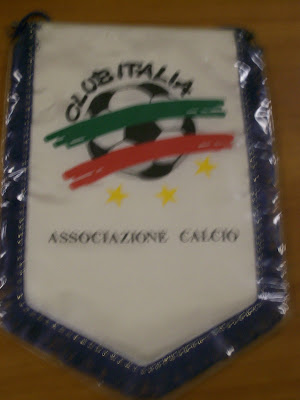 A few weeks or months ago - I can't remember exactly, but it was towards the end of the home and away season - I ended up chatting with a couple of the older heads, and the Club Italia '82 tour popped up in discussion. One of the two older blokes in this discussion could not remember anything about this tour, which was unusual as he's usually good with this stuff. As for myself, I'd never heard of it. Club Italia? What was that? Turns out it was a team made up partly of players from Italy's 1982 World Cup winning team, which toured Australia sometime in 1992, probably during the first half of that year (see below for exact date). And then I had a little bit of a light bulb moment - hadn't I seen a Club Italia pennant when I was cleaning up the social club? Indeed I had. That pennant had made little sense to me then, but it makes perfect sense to me now. Club Italia had beaten Adelaide City 1-0 before our meeting, which we lost 2-1, and then onto Marconi who they beat 4-2. That Marconi game actually has some footage online, which makes one hope that out there, somewhere, there is some footage from South's match against Club Italia. There may also be a match programme out, which we'd also love to see. Apart from the video of the Marconi exhibition match, the only online information about this tour (that I can find in English at least) comes from this link, which is a description of the Marconi match. What's interesting is that Marconi also used some guest players from other clubs for this match, so I wonder if South did the same. Of course, any further information on this tour, and especially the South game, would be appreciated.

Update
Thanks to Mark Boric for digging through some of the old Italian-Australian papers for us to get some more info on this.

For the Melbourne leg of their tour, Club Italia were due to arrive on the day before their match (on an Ansett flight), immediately heading to the Veneto Club for a welcoming reception, before holding a clinic for junior players. That evening they were to attend a reception in their honour. Their game in Melbourne (Thursday 27th February, at Olympic Park) was meant to be against a composite team coached by Ferenc Puskas, but was mostly made up of South Melbourne players. The lineups for the game were as follows: