Peter Goldsworthy is one of Australia's better known writers of literary fiction and poetry, as well as being one of its more lauded exponents in recent times. He's also someone whose work has managed to cross over into the popular sphere as well, with some of his texts (such as Maestro) also studied widely in high schools across the country. 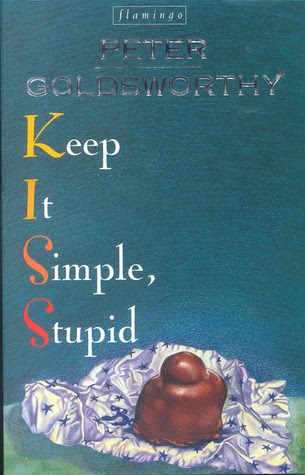 So some years ago when I was told that in the mid-1990s Goldsworthy had written a soccer novel, it was with no small measure of excitement that I sought it out. And yet Keep It Simple, Stupid, or KISS for short, seems to be one of Goldsworthy's least regarded novels. Does it merit that antipathy? Well, as we'll see, it depends on who's reading it.

Paul 'Mack' McNeil is the veteran star of his local Italian backed soccer club in suburban Adelaide. Raised by an emotionally distant and war affected father and a timid mother, as a young man Mack found a more satisfying surrogate family not just in the local soccer club, but also in its dominant Rossi family. Mack feels so ingrained in the club's culture - he's even picked up conversational Italian - that he can't picture a life without the club. However the club, and its new success at all costs British coach Billy Colby, don't see it that way. As Mack struggles to come to terms with his aging body, and the ball flying over his head courtesy of Colby's route one football, he realises his time may be up, but he struggles on regardless.

Mack also faces issues with his wife, Lisa, and their inability to conceive as well as her hostility to Mack's soccer career, in which women take a back seat. Mack, too, is fed up with his primary school teaching gig, and considers taking up a milk delivery route, in an attempt to remain a physical creature, and not just an intellectual one. So, this is very much a book about masculinities, and about the refusal to grow up, or outgrow his youth as Lisa points out. It's another novel about a male character who's unable to deal with his midlife crisis, unable to relate to women, nor come to terms with his troubled and often ephemeral, non-expressive relationships with other men.

The men in this novel are all damaged in some way, and their inability or refusal to express themselves is a massive part of that. However, even those who can express themselves often do so with a level of deviousness. Colby's hardheadedness is perhaps the exception to the rule. The women, for their part, often seem to live lives either in the shadow of their men, or in lives apart. There's little meaningful communication between the sexes, the only perceptible evidence of life in suburbia being the blue hue of televisions screens.

The broader commentary in the novel is about the decline and fall of the ethnic soccer culture in Australia, and what that might mean for the cause of the game and even multiculturalism itself. Crowds and interest have fallen away, and with it the money that spurred the game on to new levels of professionalism. The questions of loyalty and of insiders and outsiders, and what exactly it means to be part of a club, especially if such a thing is only the hobby of a rich benefactor aiming for a sort of glory from a community which largely no longer cares for the clubs they built.

Goldsworthy has a long background in Australian soccer, with an extended playing and coaching career under his belt. His depiction of the mid 1990s ethnic soccer scene is as true as any I've read. Through Mack, he shows an obvious love for the people at these clubs, but not without casting a critical eye on the negatives as well. The politics, the cowardice, and the conservatism of clubs like these is there for all to see. The members, mostly elderly gentlemen, are at best an amorphous mass, wielding no obvious power, but nevertheless remaining powerful as a barometer of who is in favour and who isn't.

KISS's final act is its weakness. After the soccer storyline gets wrapped up satisfactorily, the other story line, dealing with Mack's marriage and the ghosts of his past just doesn't sit right with me. It's too melodramatic, moving too quickly and suddenly into a sort of heightened tension that doesn't feel like a natural resolution to the narrative. Having said that though, for any Australian soccer fan with even the merest interest in this kind of work, and even for those with an interest in the game's broader history, this novel is well worth seeking out.

Post script
Year later, Goldsworthy would return briefly to his soccer theme, with the short story 'The Bet', which is focused on the absurdity of junior soccer. It's much more lighthearted in nature, but also a useful milestone on where the game had progressed to, the egoism of senior soccer transported to its junior scene, with those who are supposed to be older and wiser now living through their children.
Posted by Paul at 13.12.14