David Winner's Brilliant Orange, an idiosyncratic look at Dutch football and its culture, is one of the more unusual soccer books I have ever read. (I read the updated version, which includes a chapter on the 2010 World Cup; the original book was published in 2000). It's unusual because it is a football book which is not necessarily about football, but about a cultural mindset, and the history which had to occur to create that mindset - the transformation of an inherently conservative country into one that's equated with the most brazen sort of liberalness. 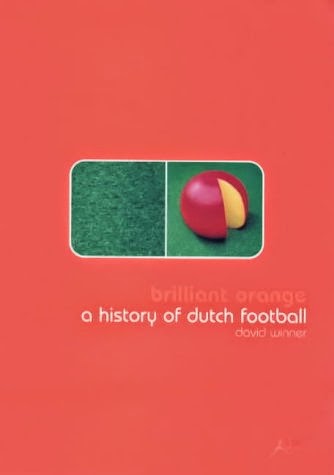 Brilliant Orange, at least as far as I'm concerned, asks two important questions. Firstly, how much can sport represent or be representative of the particular cultural aspects of a nation? Secondly, can the pursuit of intellectualism and the arts be not just reconciled with sport, but also influence each other to the enhancement of both?

Winner tries to examine how Dutch football emerged from its entertaining but backward amateur era, and how it ended up with this small nation becoming the world leader in both attaining results (World Cup failures aside) but also beautiful football and revolutionary tactics. To that end, Winner opens up with an intriguing comparison of Dutch concepts of landscaping, space and architecture, and the development of Total Football. In it, Winner sees the influence of Dutch 17th century art and the necessarily efficient use of space by the Dutch as essential components of that tactical development.

At times it feels like Winner is shoehorning his argument, using retrospective analysis to make his point. This is inevitable, but he overcomes the worst excesses of this phenomenon with the help of several of his interviewees, not all of whom are footballers or coaches, let alone even fans of the game. I must admit I was reluctant to read this book. I haven't been interested in overseas soccer for close to a decade, and I especially wasn't interested in another hagiography of the brilliance of Total Football.

But to my surprise, by about page sixty I was hooked. Yes, there are hagiographic moments, but there is also a great amount of dissent as well. For every Johan Cruyff who is all about artistry being foremost, there is a contemporary of his who makes the point that the game is about winning. Caught in the middle of these debates, which are as much about perception and nostalgia as well as ideology - there are those like Louis Van Gaal, who are in a hopeless position.

While wanting to use the talents and strengths of the Ajax system to his advantage to get results, Van Gaal is forced by the footballing circumstances of the mid 1990s - bigger, faster, stronger and better organised defences - to negate the excesses of that method. He is then accused of turning something beautiful into something mechanistic; turning what in the 1970s was an attitude into a highly disciplined system. The reality that modern football just doesn't allow talented players to slalom their way through 3-4 players at a time is a reality that the old timers don't have to deal with.

The book is idiosyncratic in several ways, with a mostly positive effect (aside from its nonsense chapter numbering system). Apart from one drawing showing the effect of a Dennis Bergkamp pass, there are no diagrams. The reader is therefore compelled to imagine the field of play during those moments. There is also a huge emphasis on Ajax at the expense of almost every other Dutch club. In part this is because Ajax are the most successful Dutch club and the pioneers of Total Football, but Winner is also interested in the city as well. In terms of other clubs, only Heerenveen manage to get anything resembling a thorough profile.

What might the inclusion of Feyenoord and PSV have done to the book? A certain element of working class perspective could have done this book some good, but by doing so, would it also have destroyed the nature of what the book is? The absence of Ajax's chief rivals creates a sort of negative space, though whether Winner intended to use that in that kind of artistic manner I'm not sure.

One last minor quibble. Where is the speed skating? How can you go through an entire book on Dutch sport and culture, and not mention even once what is apparently The Netherlands' true sporting passion? Nevertheless, this is a fine book, one which can be enjoyed by both the tactics nerds and the artistically minded alike - there's even room for the cynic, too.
Posted by Paul at 22.11.14