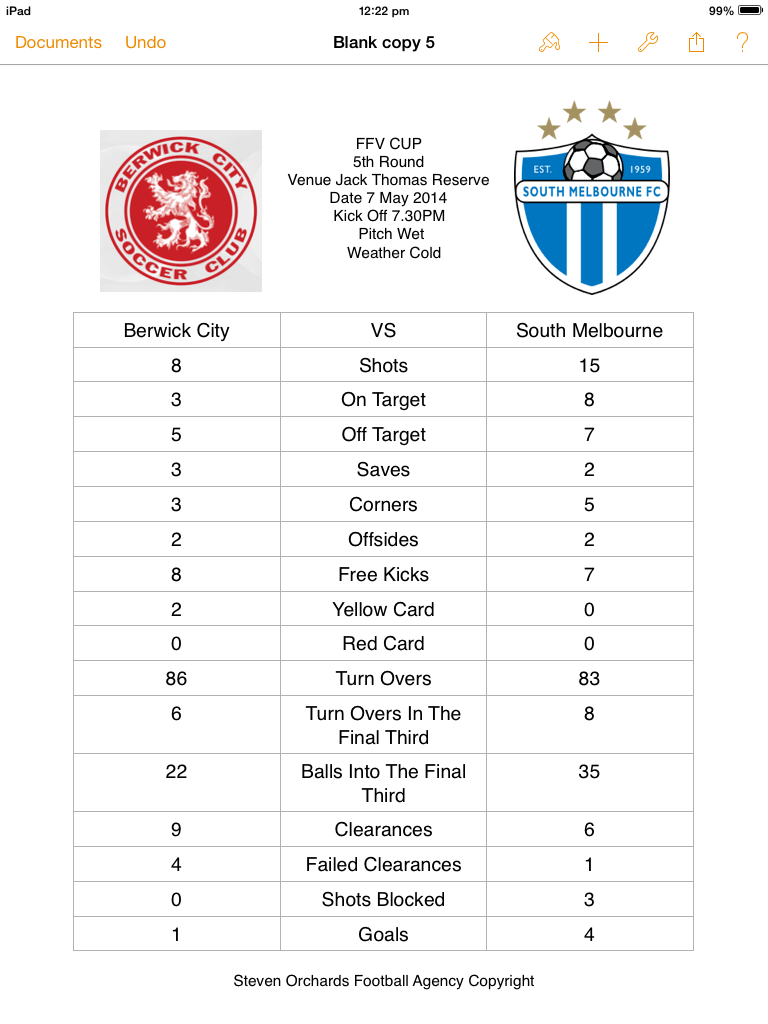 Like most NPL sides, we had been drawn against a lower division side for round 5, in our case Berwick City from State League 2 South/East (which is equivalent I suppose to last year's State League 3). What to expect from the home side? They'd hit a little bit of form over the last couple of weeks, but I'd only seen them on video losing heavily to local rivals Doveton in the opening round, who in turn got smashed by Frankston Pines last week.

It was a two hour trip out from the west via public transport, including a twisting bus ride through unfamiliar suburbs. Free entry was a nice gesture, and the lamb and the chicken on the spit was both good value ($7) and actually very good. It was my first time out at Jack Thomas Reserve, and it's a nice set up they have there - several grounds out the front of the complex, and a very wide main ground, though the light poles inside the perimeter fencing were an unusual feature. I also happened to notice the following:


Out at Berwick vs @smfc, with a candidate for one of the biggest technical areas I've ever seen. #dockertycup pic.twitter.com/ifElvWSVLd
— Paul Mavroudis (@PaulMavroudis) May 7, 2014

Though I neglected to mention the halfway line poles, which I hadn't seen since our trip to the AIS game in Canberra. The field was also in very good condition, which was good to see after the recent heavy rains probably made a mess of a few grounds around town.

The opening goal was incredibly anti-climactic. Instead of scoring on our opening possession straight from the kick off, we scored from our second possession, with Milos Lujic tapping home after Berwick City's keeper - apparently their reserve keeper, who started the game for some reason ahead of their usual number one - spilled a shot we thought he had clutched.

Goals to Leigh Minopoulos and Slaven Vranesevic made it 3-0, and we then hit cruise control. Berwick pulled one back just before halftime with a tidy header which seemed to require some adjudication from the linesman as to whether it had crossed the line - well, that's what I'm guessing the conversation was about, because I don't think it was the right time or place to discuss stock options. Much of the rest of the first half in the outer was spent discussing magic, including James Randi's appearance on a Barbara Walters show back in the day, to debunk Uri Geller.

Kobbie Boaheme added the only goal of the second half to make it 4-1, which is probably a fair score. South did the job early and then clearly played within themselves. Berwick tried hard, but eventually also seemed to put the cue in the rack somewhat, with the game gone and league action to look forward to on the weekend. We, too, while starting a lot of the fringe players suggested in the post leading up to this game, also gave a go to several senior players as the game wore on, including Jamie Reed.

We're now two wins away from the semi-finals, and qualification for the FFA Cup. No idea just yet as to who we'll meet in the next round, but all the NPL teams who played overnight made it to the next round, including Werribee City, Bentleigh Greens and Northcote, the last of which went through on a forfeit.

Lastly, thanks to Bill who gave me and Gains a lift back to Dandenong Station.
Posted by Paul at 8.5.14