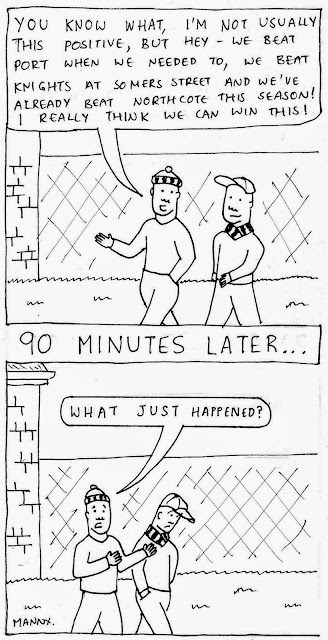 You Get An Inkling It's Not Your Day When...
You cop a goal in the first five minutes. The one thing we'd managed to avoid letting Northcote do in our previous encounter, and we'd botched it nice and early. And to make matters worse, it was from a set piece. Still, it was only one goal, and there was time to pull it back...

You Really Know It's Not Your Day When...
Your keeper catches the ball, gets shoved over the line, and the ref awards a goal. The shoulder charge on goalkeepers hasn't been seen in Australia since about the early 1950s, and we've all become used to goalies now being classified as a protected species. And yet we found ourselves 2-0 down due to the non-decision of the referee, who otherwise punished every push, no matter how inconsequential.

We really needed to have pulled back a goal before half time, for psychological as well as scoreboard reasons. Instead we fluffed our two good opportunities. One shot was palmed away by the off balance Northcote keeper. The second saw a cutback delayed after some good work on the byline, and Northcote's defence managed to scramble the ball away, much as we did last week.

We had several crosses, corners and free kicks in dangerous areas, but for the most part we couldn't get them into the really dangerous areas around the six yard box, where Northcote's defence would be most vulnerable. Their early goal allowed them to sit back and hit us on the counter.

Then the weather turned nasty, the rain hurtled down and the wind decided that it wanted to barrack for Northcote in the second half, as it blew hard towards the Plummer Street goals. Then Northcote scored their third, and we were done like a dinner.

Junk Time Blues
The last 40 odd minutes was an exercise in futility. At 3-0 down, Soolsma sliced his volley, and that was about it for us. Rixon picked up a stupid yellow card for a challenge on the Northcote keeper, which would have ruled him out of the grand final had we somehow made it that far. Heads dropped, the wind blew back every ball of a certain height, and Northcote picked us off for a couple more goals. There's little doubt that they were the better team on the day and over the course of the year, but a five goal difference between the two sides? That's a little harder to stomach.

End Of Season Stupidity (or Why Pitch Invasions, No Matter How Well Intentioned, Are Never A Good Idea)
Well, at the end of the game about 30 odd Northcote supporters jumped the fence yesterday and even went up the players race to celebrate with their team. Of course this lead to stupid scenes in the players race (not helped by some of the Northcote players deciding to turn their focus towards the South fans instead of just making their way into the changerooms).

It will be interesting to see what comes out of this, as it was actually rather hard to tell what the hell was happening there at the end, except that a large green plastic bin lid was thrown towards the players race. Like that was ever going to do any damage. There are allegations of spitting by both sides, which is just great. Still, considering the punishment we got (in my mind, justified) for our pitch invasion against the Bergers all those years ago now, what will happen to Northcote will be worth watching. Also, it was well noted by one of our forum peoples that Blue Thunder Security really dropped the ball on this one, by having all their attention focused on Clarendon Corner, with none on the equivalent Northcote group.

Peter Tsolakis, Luke Byles
Were happy that we lost. Good for them. Whatever helps them sleep at night.

Chants
A couple of late contenders for chant of the year 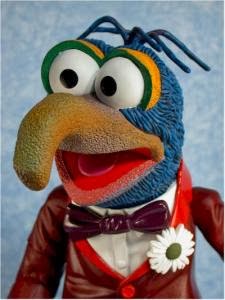 Where this chant falls over though is that, when we did have a social club, most of the people who were chanting this ditty preferred to drink away from the ground before a game. Still, some marks have to be awarded for the cleverness of the lyrics, which is more than can be said about the sharing our ground with Victory chant. Newsflash, we did that even before the reconfiguration of Lakeside.

There was also the 'your nose is bigger than your dick chant' directed to the Northcote player who had also been re-christened 'Gonzo The Great' (he had a large protective covering on his schnoz, after having broken it against in our previous meeting; he even managed to cop another blow to his nose during yesterday's game).

The 'What Were They Thinking' Department
Now I have nothing against Port Melbourne as a venue (if I did, I wouldn't go and watch games as a neutral there), but once a match attendance reaches a certain point, it is clearly not a suitable venue for a game.

Quite why the FFV decided to use this ground for a game of this stature is anyone's guess. There was one ticket booth, meaning that even 10-15 minutes into the game, there was a still a significant line waiting outside the ground.

The ground also has limited shelter and poor sight-lines. The latter was not helped by only opening up a small portion of the outer side - apparently due to some incident two or three years ago which no one can remember - which would have improved the viewing experience considerably. 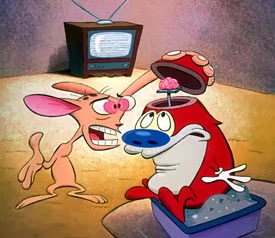 Of course the weather, which had been wavering between comfortable and slightly unpleasant, turned to absolute crap at the start of the second half, and Port's limited shelter was unable to cope with the demand. Others, seeing no way back for South and not wanting to deal with the wind and rain, just upped and left. The fans who braved those conditions deserved better.

There were surely more suitable options available. Knights Stadium, Kingston Heath, even Epping Stadium or Olympic Village. Hell, I would have happily allowed Northcote to host this match.

Next Year
Who knows what's going to happen there. NPL Victoria? State League 1 South? If there is a VPL, we can be safe in saying that Heidelberg United and Werribee City will come up, but who will go down? What will happen to Southern Stars? I know that the only constant is change, but this is getting out of hand.

Around The Grounds
Got there early enough to watch the second half of the Sandringham - Heidelberg WVPL preliminary final. Sandy were up 1-0 at halftime, went 2-0 up after a nice cut in and strike, before the Bergers pulled it back to 2-1. There it stayed, with the Bergers probably unlucky not to pull it back to 2-2. Very tough conditions, and not a particularly impressive game.

As For The Blog
Our usual winding down process begins. At some point a season wrap and awards. In December, our usual birthday/thank you spectacular. Some news as it trickles through. Which players will stick around? Who'll be out the door? New faces?

We have the prospect of elections - will a rival ticket finally emerge? Will the entire current committee stick around? We also still have the protracted social club and lease issues to sort out. After two seasons back at Lakeside, it's gone beyond a joke.

I'll also provide as much NPL Victoria news as I can stomach. It's already been a draining experience covering that issue, not just for its complexity, not just for cutting through the competing narratives, but especially in the way it has infected everything that's happened this season.

And maybe the odd book review here and there to inject of bit of culture.

Final Thought
Now what do I do with my weekends? Join my brother's Dungeons and Dragons group?
Posted by Paul at 14.10.13