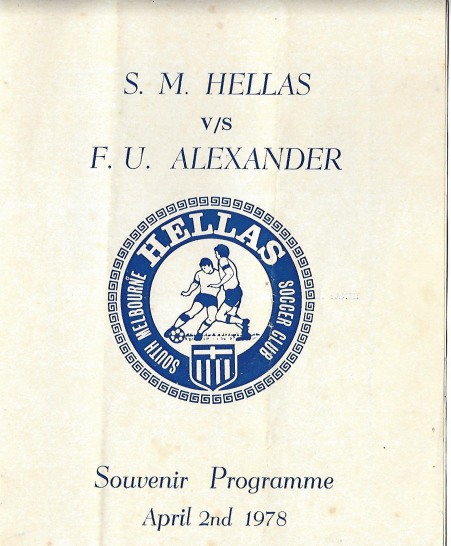 This project started when Roy Hay gave me a stack of 30 odd match programs that he had salvaged from FFV's archives.

Thanks to everyone who has made these available, either on their own websites or by allowing me to scan them - including the aforementioned Roy Hay, Damian Smith, Chris Egan, The Agitator, Jakarta Casual, The Man In The Stands, Ian Syson, Luke Patitsas, Todd Giles (Newcastle programs), Chris Terpos (Preston programs), Graeme McGinty, and Edgar Spath (Marconi programs).

Huge thanks in particular to The Agitator, the source of most of these match programs, who also scanned and collated many of them, so most of what I had to do was just upload them.

Anyone who wants to help add to the collection, please get in contact with me. If you are looking to send me match programs already in a pdf format, I am also happy to accept scanned images of match programs which have not been collated, as I am easily able to collate them into a pdf on my own computer.

Feel free to download and share these as widely as possible, as it's one of the main reasons I have uploaded them - to preserve and spread a part of our history.

Any document you download from this blog that has '(OCR)' at the end of its file name should work (to varying degrees) should you wish to search for keywords within the text. 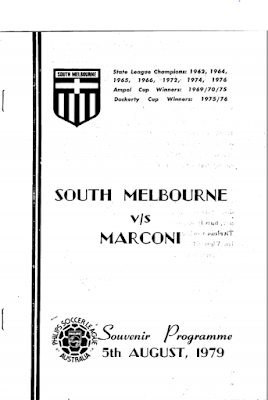 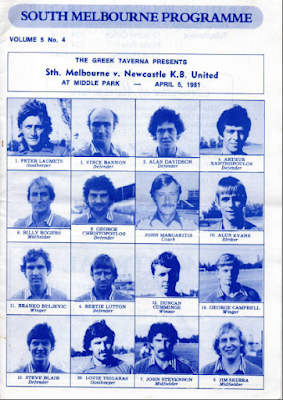 1983
Round 12, Sydney City (away) - while not part of a double header, this program also doubles as a program for Marconi vs APIA.
Round 21, Newcastle KB United (away)
Round 25, Sydney City (home)

1984
Round 12, Brisbane City (away) - single sheet which may or may not have doubled up as the match program
Round 19, West Adelaide (away)
Grand Final, Sydney Olympic (home and away) 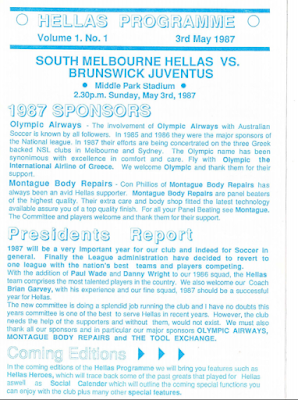 1985
Round 4, Brunswick Juventus (away)
Round 10, Brisbane City (away) - single sheet which may or may not have doubled up as the match program
Round 16, Brisbane Lions (away) 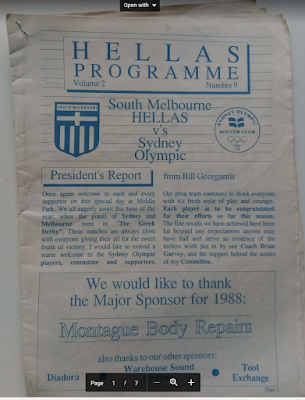 1989
Round 1, St George (away)
Round 3, Preston (away)
Round 4, Sunshine George Cross (home)
Round 5, Marconi (home)
Round 7, Wollongong City (home)
Round 15, Marconi (away) - (originally scheduled as a round 16 game, Andrew Howe provides this note: Round 14 in the initial season fixture was to be played 15-16 April but the entire Round was later transferred to the end of the season with the hype around the Israel WC qualifier 16 April, so effectively the round numbers for all Rounds 15 onward were changed by -1)
Round 17, Preston (home)
Round 20, Sydney Olympic (home) 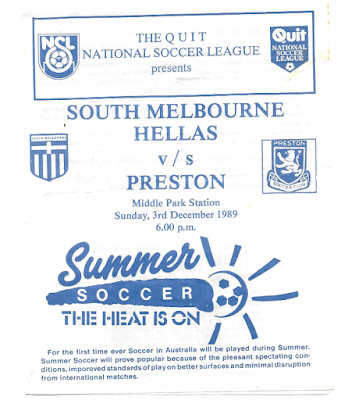 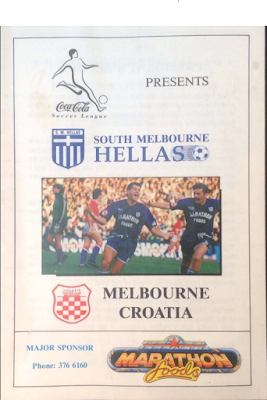 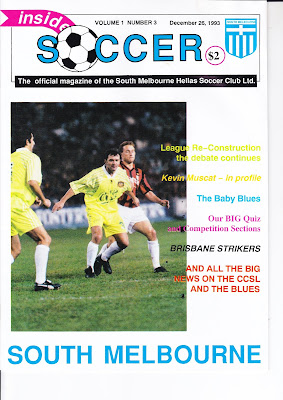 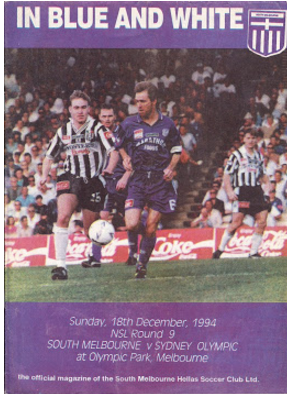 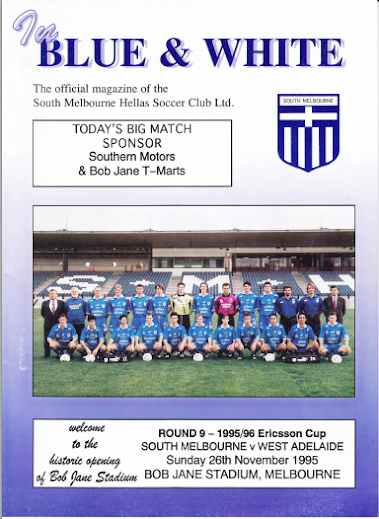 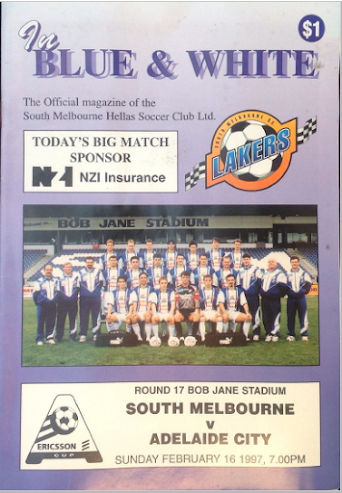 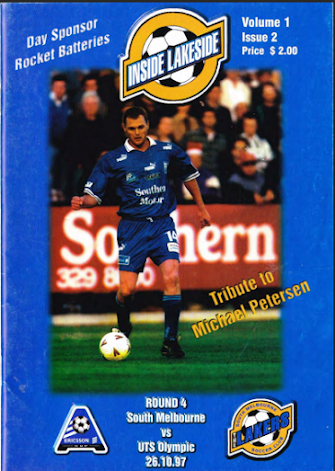 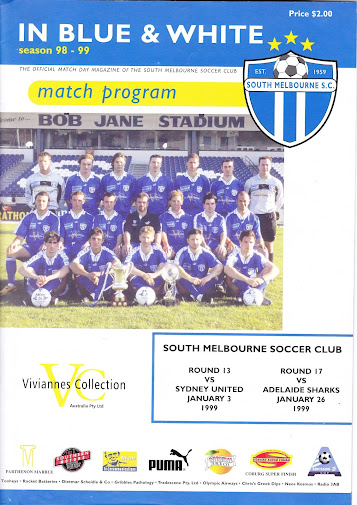 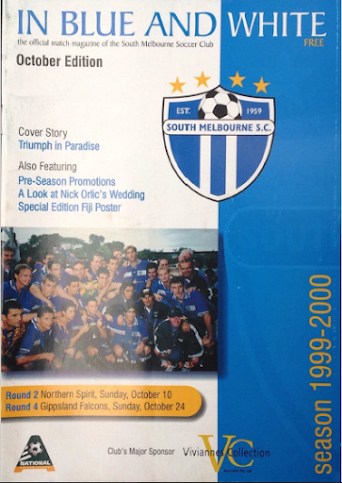 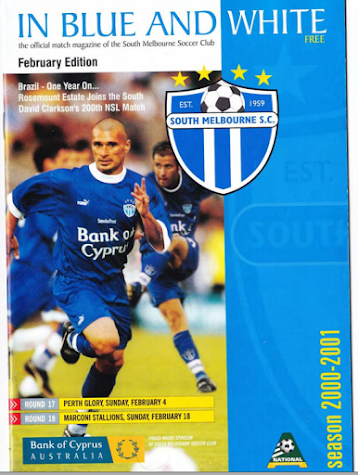 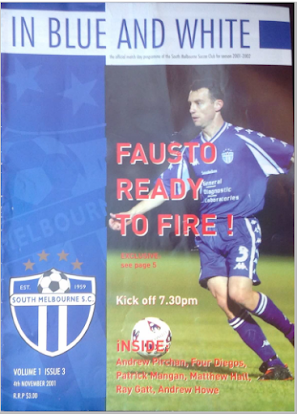 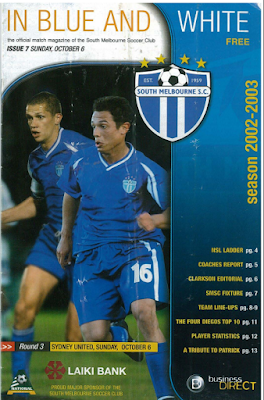 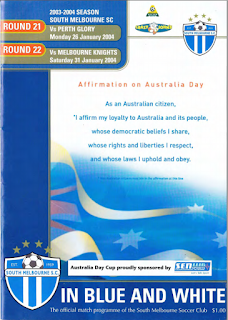 A couple of notes on the Victorian Premier League and National Premier Leagues era - few clubs, including South Melbourne, bothered to create match programs, hence the paucity of materials for the following section.

In some years South created generic/all purpose match programs which were meant to cover all home games, with no match specific efforts produced. 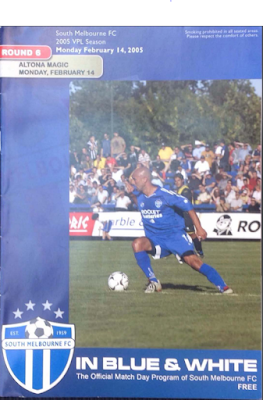 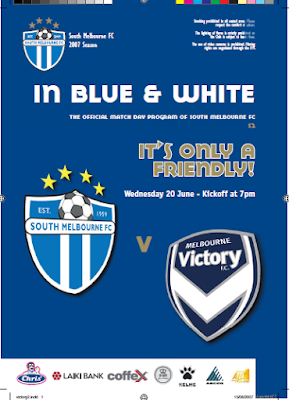 2009
South Melbourne home match booklet - all games
Round 7, Green Gully (away)
Round 17, Richmond (away)

2010
South Melbourne home match booklet - all games
Round 9, Richmond (away)

2013
I assume there must've been a Knights away program for this season, but I can't recall. 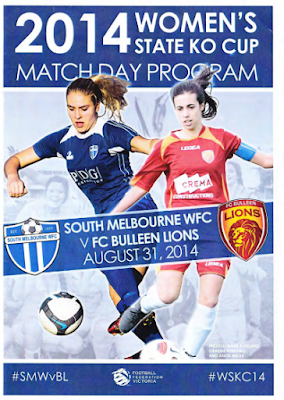 2015
Round 8, Melbourne Knights (home)
Round 12, Avondale (home)
Round 13, Northcote City (away)
FFA Cup Round of 32, Palm Beach Sharks (away)
Grand final, Bentleigh Greens