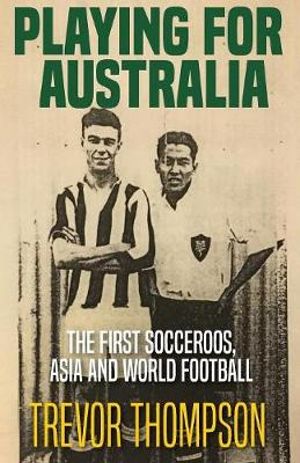 ABC journalist Trevor Thompson had previously written One Fantastic Goal, one of a slew of books that were commissioned (or were reprinted) during the time the Socceroos had made the 2006 World Cup. And I must admit, I wasn't a huge fan of that book.

Apart from its general tone, which was (naturally) celebratory of what had been achieved in a very such short space of time under the Lowy regime, I also felt like the book was rushed out to the market by an opportunistic publisher looking to cash-in on the Socceroos' moment in the sun, and that the book was therefore released in a manner which did not to the author justice, feeling a bit underdone, with many parts of that book repeating themselves.

I am glad to say that I enjoyed Thompson’s Playing for Australia: The First Socceroos, Asia and World Football far more and I'm glad to recommend it to readers, albeit with a couple of necessary caveats.

Playing for Australia came out late last year via Bonita Mersiedes’ Fairplay Publishing. Its main focus is the early days of the Australian national team, long before they were the Socceroos, and long before they were entering international competition - with a couple of exceptions, we’re largely talking about the inter-war years from 1922 through to the early 1940s.

What we get from Thompson about this era (and the years immediately preceding them) is informative and lively, and just as importantly, highly accessible. At its best, Thompson is able combine the narrative with interesting anecdotes. Playing for Australia's greatest strengths lie in the little details that Thompson regales us with, such as the “Ego yah!” chant. Here, Thompson notes the attempt by Australia's soccer players to establish their own version of the All Blacks haka, during a tour of the Dutch East Indies in the 1928.


Ego yah, ego yah! The Emu, The Wallaby, The Kangaroo, The Wombat; Who are, who are, who are we? We are the boys from the Southern Sea, Bonza Cobber, Dinki Di, Best of luck to you and I, We'll not fail her, young Australia, Ego Yah... Boska!

(although Thompson is not quite correct about the chant being created by the players for this tour; variants of the "ego yah" chant existed prior to the 1928 tour).

The book covers the various touring teams which visited Australia, including by Chinese, Indian, Czechoslovakian, New Zealand, Jewish, and English sides. These tours were both a boon and a burden to Australian soccer. When the touring teams were of good calibre, they provided excellent entertainment - but if they were too good, they made Australian soccer look second-rate. Just as often, the visiting teams were not what they were advertised as, with the promoters - often private financiers - who funded the tours marketing the tourists as being national teams when they were more likely to clubs sides. Australian crowds, too, were a fickle lot, at least when it came to value for money. They wanted to see visiting teams partly on novelty grounds (such as the Chinese touring sides), but attendance for novelty's sake is something that quickly wears thin.

The Australian teams (whether local, state, or national) cobbled together to represent the country against these touring teams, or to venture across to New Zealand or South-East Asia were scarcely able to avoid controversy in their own right. National teams and their selection policies were fraught by questions of amateurism of professionalism, national team vs state club loyalties, New South Wales dominance, and the “necessity” of playing Victorian and South Australian players in the national team in their home states, even though those states were weaker. Along with splits in the national bodies which created a weak base from which to evangelise the game, and the failure to maintain meaningful interstate competition, Thompson's overview is a useful way of seeing how soccer's lack of a dominant administrative centre has a long history.

But politics aside, there is also the matter of Australia’s slavering devotion to England's Football Association, as Australian soccer throws its lot in with a body (the FA) which cares little for soccer's fortune's in the Antipodes. The longstanding and persistent lack of moral, financial and logistical support offered by England towards Australian soccer, and at times even hypocrisy of British sporting authorities should have rung alarm bells for Australian soccer years before the penny dropped. Yet the Australian soccer authorities, even as they became ever more aware of this lack of support, nevertheless remained devoted to the FA, even as Australia remained a subsidiary member of the FA on the same level as the Elementary Schools Association.

The book also detours into chapters about contemporary Indian, Indonesian Japanese, Chinese, Filipino, Korean, and Kiwi football. Some of these nations obviously had interactions with Australian soccer, either via tours to Australia or by Australia, but the main point of Thompson’s summaries of those neighbours of ours is to show how differently they approached international competition – not friendlies – and in some cases the differences in their relationships with their own colonial masters (East Indies/Dutch) or as colonial masters themselves (the Japanese in Korea and Manchuria). A point that the book seeks to make is that Kiwi soccer was especially poor by the 1930s – and that as a consequence of this, an inward looking Australia lacked meaningful competition among its own Empire brethren.

While I enjoyed the book, it does still suffer from some of the issues that Thompson’s previous book did, as well as some other issues. The book jumps around very quickly at times, and it can be difficult to follow the central argument and/or narrative. That’s because the book is at times underwritten, in that some chapters feel they're one anecdote or point of interest following another in a heady rush. That may be the case here because it’s a bit under-edited, an issue which can be put down to what is still in many ways a production of a fledgling small publisher finding its way.

Of more concern is the complete lack of footnotes as well as a bibliography or reference list. I understand that on one level the book isn't meant to be an academic treatise, but clearly there’s been a fair bit of research undertaken by Thompson to write the book, and I think it would've been valuable for people to see the sources that he’s relied upon, especially where it presents information that may new to researchers. Overall however, I really enjoyed the book, and recommend it to anyone looking for a history lesson on the early days of the Australian national men’s team, and the era and conditions under which they played.
Posted by Paul at 8.11.19