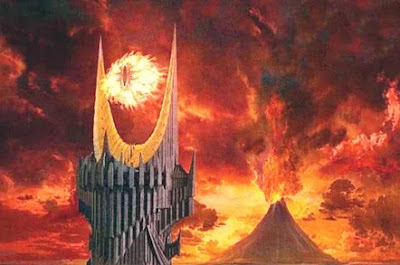 I wasn't there - I was here - this is just stuff that I've absorbed through a mystical aether.

In some respects much of the following material seems to resemble stuff that would get mentioned at an AGM, just without the detailed financial reports. President Nick Maikousis and club secretary Mario Vinaccia did most of the talking, in front of an attendance of about 30 odd members.

One of the taekwondo practitioners who use the social club for their training dislocated their shoulder on the futsal court just before the members forum started. So, you know, promising start, heinous omen and all that. A speedy recovery to our Olympic hopeful.

The board claimed that the club's external debts would be gone next season, but that director repayments would still be there. Despite the external debt being lifted, money would not be reinvested toward the playing budget. This suggests not only a desire to pursue the club's recently announced and youth product oriented "Baby Blues" program as well as a desire to attract players from other clubs that wish to participate within that ethos - it also suggests a reluctance to get involved in the player wage arms race which is taking place in this league.

In terms of of rumours of players being owed money, the club cited that they use a different payment system to many (if not most) other clubs, with wages being paid monthly even during the off-season. This results in a better (more balanced?) cash flow for the club. The board noted the difficulty of attracting players from other clubs, with the reason being players accepting more lucrative offers from other clubs. I suppose though that no matter what the club says and regardless of whatever the truth may be), rumours of us falling behind in player payments will continue to circulate.

There was a rumour published in Neos Kosmos that Andrew Mesorouni (who was not present at this members forum) was putting the most money into the club and thus controlling the club. This rumour was rejected by the board.

With regards to the stadium, it was noted that at state government level, if AAMI Park is unavailable, Lakeside is the backup. There was concern from members on how our football veto works in this situation, possibly with regards to the arrival of Western United on the scene. There was mention of ongoing issues with the State Sport Centres Trust, some of which related to simple bureaucracy, as it relates as government people coming and going, and (I assume again) relationships (and understandings) having to be built and re-built on a frequent basis. All in all, nothing particularly new here - these are questions which regularly brought up at club sanctioned member gatherings. Still, it's good to see these matters get a run, because they will remain relevant to our well-being for hopefully the next four decades.


There was also some discussion on how to retain young players and parents, miniroos and junior sub-committee which include parents. With regards to the turnover in technical directors, at least in the most recent case it's simply a matter of the hiring of the previous guy not really working out.

It was noted that the league's live-streaming this season had had a noticeable effect on attendances (and gate money) for the negative - this is, to be fair, a league-wide issue. The only saving grace from NPL Victoria's live-streaming was the chance for the club to save some money on our media team costs (even though some of those costs will be lost next season when Football Victoria institute their $5,000 media levy). It was noted also that promised income from the streaming had not eventuated; it's unclear if this is solely a South Melbourne issue, or once again a league-wide issue. 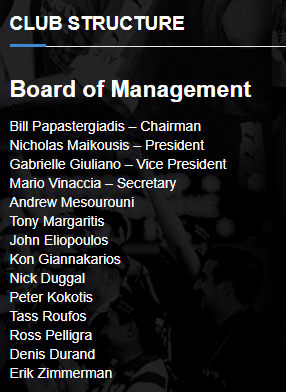 On the matter of bringing back the name "Hellas" now that the National Cub Identity Policy is no longer in operation, the board noted that the name has not been used for decades, and that it was not a pressing issue for the club/board, and not something they were looking to initiate - however, the club's members would ultimately have a say in the matter.

There was the odd (to me at least) situation that there are currently 13-14 (depending on who/how you count) active board members (see right) which exceed's the limitations set by the club's constitution. The board responded that some of these people are observers and/or volunteers, and not decision makers.

There was some discussion about the second division/Championship model, which included the hope (from the board at least; I'm not sure if anyone else agreed) that our latent/dormant/in occultation fan-base would return to the club if it played in a proper second tier. However, as there are still many details to be settled with regards to the second division, it's not really worth discussing it in  much depth.

It was promised that the next AGM would be held this year.

For some reason the old news that Chris Taylor knocked back Nelly Yoa way back when was brought up.
Posted by Paul at 16.8.19