The most blessed thing about this win is not only the fact that it secures our Victorian top-flight tenure for another year, but that it does so with a nice, clean, and unambiguous three games to spare. Say what you want about the squad's calibre, its erratic performances, and its baffling inability to score goals at regular intervals - when comparing 2019's team to last year's, this year's side is officially at least three points better than what was dished up last year.

That's no claim to fame for a club like ours, which will almost certainly miss the finals for a second year running, but you've got to acknowledge even incremental improvement where you can find it.

We looked sharp from the start - Gerrie Sylaidos launching a looping shot which the Thunder keeper was just awake enough for - and took the lead about ten minutes in after a (let's call it a) right-footed cross from Pep Marafioti was bunted in - just - by Billy Konstantinidis. There was confusion in the stands about whether the goal had crossed the line, but there were no complaints from the opposition defenders, even though one of our marshals behind that goal later claimed online that the ball had not crossed the line.

Apart from a ten minute patch in the first half - predictably arriving after about 25 minutes - Thunder didn't really cause us too many problems in the opening 45 minutes, while we wasted more chances. Pep Marafioti hit a right foot(!) shot off a turn on the edge of the box that cannoned off the crossbar, and that was just one of the chances we didn't get full value for.

The second half was pretty good from us, but without having yet put away the second goal, and with Thunder's season on the line, there were bound to be some nervous moments. We got two or three big ones, and somehow managed to dodge all of them. A long-range shot which drifted wide; a goal called back late (albeit correctly) for offside; and a soft header from a tight angle which should've been harmless, but Roganovic had slipped, managing to at least palm the ball away for a corner.

What would've happened had we conceded an equaliser with 15 or so to play? Who knows, but I wouldn't have been thinking good thoughts. Luckily for us, Kosta Stratomitros headed home a Sylaidos corner for the second week running, and that killed off the Thunder resistance on and off the pitch. There had been a reasonable and quite sweary presence of Thunder fans in the stands, but perhaps not as many would've been had Preston not been playing North Sunshine in a championship decider. Once the second goal left, those fans started to leave, and missed Marcus Schroen's close range goal for 3-0.

The man of the match probably went to George Gerondaras, who played a good game at right-back in place of Ben Djiba for some reason or other. Gerondaras put in some very timely tackles during the first half, as well as one poor one which got him a yellow. Ironically, it was probably that yellow which saved him from getting a yellow later on after he attempted a very blatant form of time-wasting and slowing down of the play; either that, or the referee took pity on George's youth and inexperience. Still, it was an impressive performance, give or take the odd nervous and rushed moment.

But the thinking person's man of the match though probably goes to Jake Marshall, who kept Brandon Barnes very quiet. Shut down Barnes, who's been single-handedly keeping Thunder's season alive, and you're halfway to getting a result over his team. 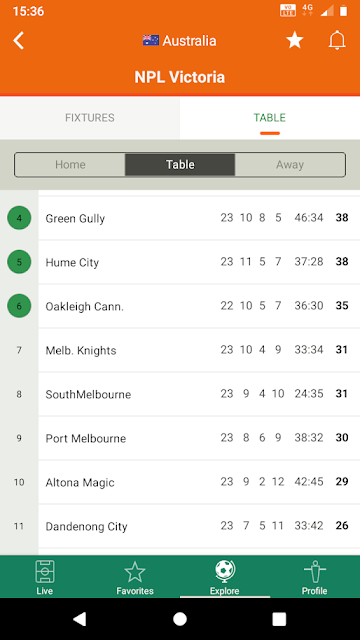 Finals prognostication (status: enjoy it while it lasts)
I bet a few you didn't think this was at likely to be a possibility before last Sunday afternoon. Probably most of you still don't think we're a chance, and that's fair enough too.

Some of you may not even want a finals appearance, thinking perhaps that we'd be ripe for humiliation should be make it - or maybe you're a club financier who would hate to make a late run to the finals, which would only result in several win bonuses and a finals game (or heaven forbid, two) where we wouldn't get the gate.

The sums are pretty straightforward: barring some colossal screw up by Gully and/or Hume in their remaining three games, the best we could possibly manage in 2019 is sixth. To do that, we'd need to "run the table" to borrow a phrase from American football parlance - that is, we'd need to win every game.

That's not going to happen, especially when you consider our erratic form up to this point, our poor goal difference, and the fact that sixth placed Oakleigh has a game in hand.

Just be happy (or less unhappy) that I can omit the bottom three teams from this screen-cap.

Next game
Oakleigh away on Friday night. They're undefeated in the league for like, forever at the moment. Quite possible that a few more South people than usual will be streaming this one.

Flying off the production line (just don't ask where...)
Congratulations to the under 20s, who managed to secure their championship with a comfortable win over Thunder on Sunday. While I'm sure the boys would've wanted to go through the season undefeated, at least the previous week's loss to Hume allowed the team to win the championship on home turf.

I watched the first half of the curtain-raiser, as has become my late season mini-habit, from inside the scoreboard control room, and the second half from inside the social club - well, I watched the last portion of the second half in the social club once someone with authority and the requisite know-how put the stream on the screens inside the social club, while I enjoyed a burger (quite good, and also delivered quickly), and not-so-much-enjoyed a slice of galaktobouriko (too custardy and runny, instead of the proper firmer texture, courtesy of skimping on the semolina I'm guessing here; also deficient in syrup for my liking). 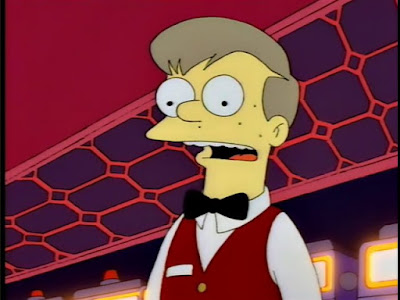 Speaking of the social club, what's going on in there? They've upped the prices of the souvlaki from $8 to $10 because of an increase in the cost of lamb (according to a notice at ye olde ordering station), but one food critic sitting at my table also noted that the souv had seemingly shrunk in size from the usual offering - and the large chips was also a much diminished serve compared to what was produced so far this season.

In addition to all that, one thing which came to my attention courtesy of, well, being told about it, was the periodic inability of people to buy booze at the bar because one of the main people manning the register and bar area was underage, and thus not licensed to serve alcohol to patrons. I mean, good on the kid for following the rules, but the social club operators have really got to sort this out by the start of next year.

Anyway, back to the under 20s. They got a warm reception from the crowd during the early part of the second half of the senior game as they walked in front of the grandstand.

Of course while we're all very happy for the boys on their deserved title, quite a few people will be asking how many if any of them will end up playing senior football for the club in the near future.

My answer to that would be, well, who knows? It's very hard for any club to create teams made up mostly or even significantly of its youth products, and the higher up the divisions that team is, the harder it is. Perhaps with the lower senior men's wage budget, there may be more room for our youth products to come through.

Either that, or we'll do what we normally do - let them wander across the cursed earth of Victorian for a few years, before picking them up again down the track after they've played for Bentleigh or someone like that.

Final thought
Already with the rumours about who we're signing next year! Hold off until the season is officially over you ghouls!
Posted by Paul at 30.7.19