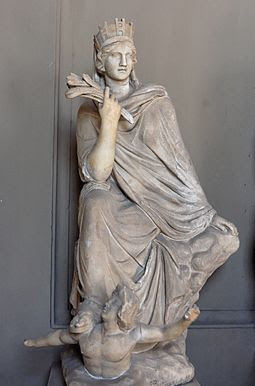 As badly as we have played this season, it is fair to say that up until three or four weeks ago, we've also had our fair share of rotten luck. Suspensions, injuries, vacations, open goals squandered: you name it, we've had it, as well as some things we can't name. So, while we can commend the squad for its new found resolve, and new coach Con Tangalakis for setting the side up for the relegation battle, let's all give a massive round of applause to the goddess Tyche for finally giving us a bit of a hand.

We had our bit of luck the other week against Bentleigh, the but the good fortune was coming out of our ears on Sunday. Of course it didn't quite seem like that at first what with not having turned up for the first half or hour or so, and giving away what looked like either a very soft or very avoidable penalty in just the kind of position where there's no life or death need to do so.

But then we managed to wake up a bit and for the last 15 minutes of the first half at least we created some chances and such. Still, Pep Marafioti's goal, while admittedly well placed, relied as much upon the good fortune that such flick headers rely on, as well Hume keeper Michael Weier getting himself into a bit of a tangle trying to figure out which direction he was meant to be heading in. It was probably a touch fortunate as well that Leigh Minopoulos wasn't called for offside at the point Marafioti headed the ball. Maybe the linesman didn't see it, maybe he didn't think Minopoulos was interfering, either way it counted, and we were in with a chance of doing something we'd not done yet in 2018: win a game after going a goal behind.

Speaking of real and imagined offsides, the first half had what looked like two of the worst offside calls I've ever seen, one where Minopoulos was called offside when he was about three of metres onside, and one where he was called onside despite being two metres on the wrong side of the ledger. Anyway, such is life, but geez they looked like terrible calls at the time.

Now some people are saying that that 15 minute patch in the first half was all the quality that we were really able to produce during the game, but I think that's a bit harsh myself. I agree that we were outplayed, but I don't agree with the idea that we did nothing at all in the second half. Having said that, throughout the game Hume squandered about four or five clear cut chances that should've consigned us a to a loss. Our defending was not up to scratch, in particular knowing when to press, and even more in particular being able to track the runs off the ball that Hume's attacking players were making. They were excellent on that front, perhaps the best of any team I've seen this season, but unfortunately for them, they didn't have a striker up front to make the most of any of the chances they created. Nikola Roganovic didn't have to make a save off any of them, so wayward were Hume's shots on goal from otherwise point-blank range.

While we were bumbling about when in defence and sending balls forward trying to find a goal, we made a whole bunch of subs, one of which included a tanned Milos Lujic. Standing next to me, Dave - who is becoming quite the terrace wit of late - posited that it would be about 33 seconds before Milos took a dive. Well, Dave's estimation was about 15 seconds too generous. Now, maybe when the replay comes out, the EPL assistant calibre English referee here to teach us many things will be proven right and that Milos was indeed bundled over illegally by a Hume defender. Anyway, Milos stepped up and scored it, we survived the remaining 20 odd minutes one way or another, and got three very valuable points. It wasn't particularly convincing, but so what? We're getting back toward having all of our senior players available, and the team more often than not now looks up for the fight.

Next game
Heidelberg United at home on Sunday afternoon. The men's match will be preceded by the NPLW senior match, also a South Melbourne vs Heidelberg affair. How convenient is that? The women's game kicks off at 1:30.

Tribunal shenanigans
So apparently we are going to the tribunal after all for that brawl against Northcote. I'm told it's not because Northcote pushed for it, and it's not based on any extant footage, so who knows what the hearing is going to be based on.

Relegation/survival prognostication, still an ongoing concern
In regards to our chances of survival, the past week was a bit of a mixed bag. First, the good. Just in case you skipped ahead to this section: we won! And we beat a fellow relegation battler! That's three points we've got that they don't, and thus three points ahead of Hume with a much better goal difference. The other good news is that Bulleen lost, meaning that we are now ten points and significant goal difference ahead of the last placed Lions. Realistically, with five games to go, they ain't catching us.

In slightly less good news, Kingston beat Northcote last night in a match we would've preferred had ended up in a draw. That result means that Northcote are now in second last, seven points behind us, and again with a significantly inferior goal difference compared to us. You can't write them off though - after all, they have Bulleen yet to play - but you'd rather be where we are than where they are. Sadly, because Kingston got the win, they're still only four points behind us, making the game between us in a few weeks even more important.

Throwing a curve-ball into the works of all things relegation is the steep decline of Green Gully over the past two and a bit months. Our recent good run of results - ten points from a possible twelve over the past four weeks - means we have overtaken Gully, whom we play in a couple of weeks, on goal difference. Gully also have Hume and Kingston to play in their remaining games, completely upturning whatever half-arsed musings I made on this relegation situation a couple of weeks ago.

For those of us more inclined to be of a positive frame of mind - and let me make it clear that I am not one of you - our good run of form, if you want to call it that, has seen us keep up with the top six, maintaining the four point gap between ourselves and the current sixth placed side, which is Melbourne Knights. But that's for others to dream about. I'm only so bold as to say that we won't finish last, that we probably won't finish second last, and everything after that in this horror show of a season is a bonus. Quite obviously, we are not safe yet.

Vale Jim Postecoglou
Sad news this week that Ange Postecoglou's father has passed away. Ange has written a moving piece on what his father meant to him, which is well worth the read. The details for the funeral are below.

On behalf of the Postecoglou family, we would like to thank you for all of the messages of support for Ange. They would also like to confirm that the funeral for Jim will be held at 1.30pm on Wednesday July 25th at Box Hill Greek Orthodox Church, 1 Hopetoun Parade, Box Hill.
— South Melbourne FC (@smfc) July 24, 2018

A-League meeting
A reminder that the club is hosting an information session for members and season ticket holders this Thursday evening on the club's A-League bid. The all-you-can-eat buffet meal service will also be running, along with I assume the half-price drinks.

Oh my God! The dead have risen and they're voting South Melbourne Hellas!
Speaking of the A-League bid, in their clickbait wisdom the good folk of FourFourTwo conducted a poll the other week, asking their readers which of the ten remaining A-League bidders they would like to see be included as part of the A-League's imminent expansion phase. This robust and unequivocally scientific poll was narrowly won by our very own South Melbourne Hellas over the Wollongong bid, both some distance ahead of the next best Canberra bid, and all three a very long way in front of the other land and property development firms masquerading as Australian top-flight soccer operations.

Anyway this result sent some of the very small amount of people who care and put value into these things into a bit of a spin. mostly those who hate South Melbourne, ethnic soccer, etc. "The result changed once South Melbourne shared the poll on social media!". Well, what did you expect them to do, sit there and let another pointless yet easy to exploit positive media opportunity go to waste? "The poll must have been corrupted!". Well, look, you know what? It probably was. Internet polls are an enormous waste of time, not least because of their easy corruptibility. But - and here's the kicker - if that was the case, still the only people who could be bothered to corrupt the poll apparently did so in favour of South Melbourne, and probably the other two vote winning bids. Why? Because they're the only bids with enough people that care, yet.

For all the talk about groundswells of untapped interest from the more nebulously conceived consortia, the only groups who have come out in support of them are local councils and assorted state politicians, and to a lesser extent some clubs - though these last are usually grouped together in an amorphous mass. Not that any of that matters of course, because this is just a playground optics game, but my word it is fun to watch the cat among the pigeons. 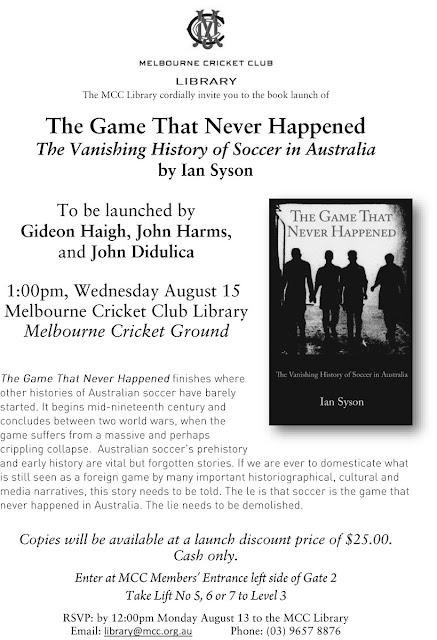 Ian Syson book launch
Here's something a few of us - OK, maybe just me - thought might never happen. Ian Syson, one of South of the Border's dearest friends, is holding a launch party for his new book, The Game That Never Happened: The Vanishing History of Soccer in Australia. This has been a work long in the making, and we'll be talking about that a bit on the blog at some point in the near future I hope, when I do a kind of overview of what this is all about.

The details for the launch are as per the flyer on the right. Understandably, being held in the middle of the working week in the middle of the working day isn't convenient for those outside the layabout university and professional sectors, but for those who can spare the time, it'd be great to see you there. If you do intend to show up, please RSVP to the MCC Library, because they need to put your name down so that security will allow you inside the building.

The book should be available in the usual online and bricks and mortar locations. If it isn't, you can contact the publisher or distributor directly, or give me a bell and I should be able to arrange something.