A bit of sad news this week, with one of our favourite blog readers and recent South converts GeordieHellas revealing that he and the family are headed back home to the UK. It was always a pleasure to chat with Andrew on the terraces (and hear his catch cry of 'Howay The Hellas!'), and seeing his young son Harry grow up at Northcote and Lakeside.

A proud Newcastle United fan, Andrew was also heavily involved with the local Australian Newcastle United supporters group Aussie Mags, who I'm sure will also miss him. On the plus side, he'll get to see his beloved Toon in the flesh again, as well as watch them at a decent hour.

South of the Border would like to wish Andrew, Vanessa and Harry all the best back in the old country. 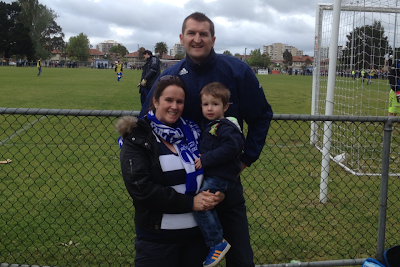 Sadly the missus and I would like to tell you all we won't be at Lakeside Stadium next season as we are heading back home to Newcastle upon Tyne to live.

The missus and I went to our first South Melbourne FC game in 2007 for three very simple reasons, we liked football, we wanted to be able to walk (we lived in St Kilda at the time) to games so we could have a drink and because I'd heard of SMFC prior to moving to Australia in 2005.

I especially very quickly fell in love with watching SMFC, the missus liked the banter and the beer mainly to be honest, and so did I too but it also filled the void I felt from no longer going to watch Newcastle United games live.

Our son was born in July 2011 and he attending his first game at 3 weeks old! The last two years we've had family memberships, and actually relocated to South Melbourne, making walking to home game even easier.

We been to Richmond away, Bentleigh away, Melbourne Croatia away and Northcote away (and home numerous times of course!).

So we'd like to thank you all for being brilliant Hellas supporters, for being very welcoming and we wish you good luck in season 2014 and beyond. We will be following events from overseas and hope one day the club creates a overseas membership and streams the games live, just an idea!?!

Email ThisBlogThis!Share to TwitterShare to FacebookShare to Pinterest
Labels: pre-season 2014