This review first appeared in Goal Weekly. It's a pretty sloppy review which probably doesn't do the book justice, but I do hope people give it a chance (use any book vouchers you got for Christmas if you must), as there's several important stories it has to tell.


There are plenty of people out there who will tell you that sport and politics should not mix. And yet throughout John Maynard's The Aboriginal Soccer Tribe: A History of Aboriginal Involvement with the World Game (Magabala Books), for many of the Aborigines involved in soccer, the two are impossible to separate.

Make no bones about it, Soccer Tribe is an important book. In large part this is because it seeks to cover new ground in an uncharted part of our soccer history, and attempts to link the game to the broader Indigenous struggle for social justice. Soccer Tribe's best sections are those which merge the personal with the political, recounting the important players of the past, and the social and political obstacles still in place preventing more Indigenous Australians from taking up the game. 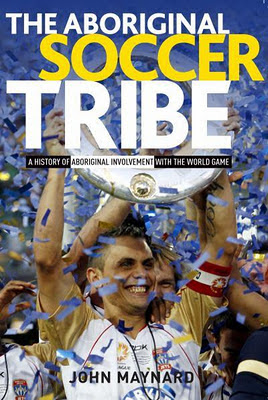 In the 1950s, when Charles Perkins, John Moriarty and Gordon Briscoe emerge on the Australian soccer scene, Maynard showcases the role that soccer played in this trio's overcoming of social disadvantage and their subsequent entry into the political and public sphere. The self-esteem gained from their success in the game, and their treatment as equals by the Continental European migrants who had come to dominate Australia soccer by the early 1950s was crucial to their political awakening. The late Perkins recalled that soccer:

“brought me into the migrant community where I found great satisfaction, no prejudice, no history of bad relations, no embarrassing comments or derogatory remarks, they welcomed me into the fold and I've been there ever since”

Also crucial to their political awakening was that all three travelled to Europe to try their hand at soccer careers. Most Australian soccer fans would be aware only of Joe Marston and his appearance for Preston North End in the 1954 FA Cup final. But Moriarty, Briscoe and Perkins were just as pioneering in their endeavours, though they mostly played for high ranking amateur clubs. There too, they found an acceptance among the English that was wanting in Australia.

Harry Williams, the first Indigenous player to play for the national team, also gets his due recognition. A powerful advertisement for what soccer can do for Indigenous people, Williams was part of the groundbreaking 1974 World Cup squad. As Aboriginal activist Warren Mundine noted on watching Williams play in that tournament, 'with his big afro hair, he was a big inspiration to us all, because in those days only a handful of us played the game'.

Maynard also dedicates several sections to current and future Aboriginal stars of the game. This is one area where some may consider Soccer Tribe to have slipped – and it's a somewhat inevitable failing in a book seeking to celebrate Indigenous achievements in soccer – as Maynard is prone to over-hyping the talents and potential of several contemporary players. Some readers may query the merits of some of Maynard's appraisals.

One of the most pleasing aspects of the book is the significant section on Aboriginal involvement in women's soccer. Though several of the player profiles are short, those that do go into more depth provide stories equally as gripping as those of their male counterparts.

The story of Karen Menzies in particularly moving. Taken from her mother as an infant, raised as a 'white' child without any knowledge of her Indigenous background, breaking through barriers that female athletes have always faced in pursuing male dominated sports, and being openly gay to boot, Menzies reached the heights of playing for the Matildas. Sadly, her involvement in the game stopped when she became faced with further discrimination when she sought to a high profile assistant coaching role. More reassuring is that there were and are still Indigenous women who have followed in her footsteps towards playing for the Matildas, such as Kyah Simpson and Lydia Williams.

Maynard also covers the problem of getting more Indigenous Australians into the game. Soccer in Australia, apart from the notable exception of Newcastle and the Hunter Valley, is a sport whose heartland is based in the large metropolitan centres. To counter the appeal of rugby league and Australian rules in particular, who have such a healthy engagement with regional Australia, and thus with Indigenous people, the game must make a concerted and committed effort to promoting the game outside the major cities. In addition, Indigenous soccer players need to be better utilised in promoting the game, and showcasing the huge opportunities there within it. As with all codes, emphasis is also placed on the particular needs of Aboriginal players, especially those from remote communities and the problems of homesickness.

While all those points are crucial, occasionally Maynard also neglects to provide the wider context of a given situation. While being an Aboriginal soccer player from a rural area such as the Sunraysia region is not easy, especially with regards to the huge distance from the game's metropolitan strongholds and higher standards of competition, these same problems also exist for non-Aboriginal soccer participants, albeit obviously not to the same extent.

Likewise, the lack of primary accounts in some sections also creates a jarring effect when put up against those parts of the book where participants and their families are interviewed by Maynard. When relating the story of Mildura United, and Chris Tsivoglou's noble attempt to provide opportunities for Indigenous youth from the surrounding missions, Maynard relies on reports from the Koori Mail and Sydney Morning Herald, thus denying people like Tsivoglou and his charges from providing more in depth analysis of the wider Mildura soccer scene.

One other issue pops up repeatedly in Soccer Tribe – the lack of a binding narrative. Given the history of Indigenous Australians since European settlement, this is easily understandable, to the point where this lack of narrative becomes a key part of the narrative in itself.

To illustrate this point, Maynard uses the story of Bondi Neal, a star goalkeeper who played for several clubs around Newcastle and the Hunter Valley in the early 1900s. Despite several reports on his goalkeeping prowess in contemporary newspaper accounts, there are scarce details of his origins – and after the passing of stricter laws controlling Aborigines circa 1910, Neal disappears entirely from the public record, along with any known Indigenous participation in soccer.

Soccer Tribe's main flaw is almost an inevitable one – in the past, so little effort has been put into compiling work on the past, present and future of Aboriginal soccer, that it is difficult to know where to begin. Maynard opts to go for a sort of sprawl, trying to cover as much content as possible. Nevertheless, it is still a satisfying and intriguing starting point for coverage into the Indigenous soccer experience, and a worthwhile addition to the collections of Australian soccer aficionados. Hopefully it contributes to being a launching pad for more investigation into Aboriginal soccer.
Posted by Paul at 26.12.11