Footballing With The Stars


Sure, it's Glenn Manton as a Goalkeeper part two - but tell me you didn't yelp when you flipped over the Herald-Sun and saw the back page with a massive picture of a South home jersey?

And wouldn't Rocket Batteries be dancing around in celebration at their investment paying off for the first time? 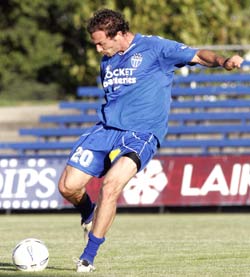 STROKE victim Angelo Lekkas is threatening to sue his former club Hawthorn for more than $1 million while contemplating an audacious career switch to soccer.

Lekkas, 29, has been training with Victorian Premier League club South Melbourne for the past two weeks and has not missed a session.

While Lekkas and South are suggesting his appearances at the Albert Park ground are "just for fitness", it is believed club is hopeful he can succeed.

The 180-game AFL on-baller played soccer as a junior and has not looked out of place at training.

Meanwhile, Lekkas is embroiled in a bitter battle for compensation for his career-ending stroke, sustained in a practice match in Western Australia in 2005.

Lekkas said last year his neurosurge on had warned risk of another stroke had increased.

Originally Lekkas was believed to be seeking about $150,000 compensation, with the Hawks offering only 10 per cent of that.

But negotiations soured after a meeting with Hawthorn officials last week.

Lekkas' manager, Jacques Khouri, said yesterday the officials asked Lekkas to sign a waiver, absolving the club and its doctors from any blame if a he accepted the payout.

But when Lekkas refused, Khouri said he was told he was no longer welcome at the club.

"Initially they promised Ange he would be welcome there, either way, whether he pursued a claim or not," Khouri said.

"The boy's got 30 per cent damage to his brain and will be on medication for the rest of his life, and any further head injuries could cause death."

Khouri said he had been approached by a legal firm to take on the case for free and it was looking at the exact nature of Lekkas' injuries.

When asked if Lekkas could seek damages of $1 million, Khouri said the claim could exceed that figure.

"Brain injuries can be life threatening and the brain doesn't recover," Khouri said.

"It's an absolute insult to be told he is no longer wanted around the club.

"What if it was Shane Crawford who suffered a similar injury or the chief executive (Ian Robson)? How would they deal with it then?"

Robson said last night he was not prepared to respond to specific claims made by Khouri, given that the matter could be subject to litigation.

"What I will say is that we have always shown an on-going commitment and interest in Angelo's welfare," Robson said.

"Given that the journey with Angelo is almost 12 months since he suffered the stroke, I believe the club has been respectful of its obligations to his welfare at all times."

Robson said Lekkas was encouraged in his recovery, firstly with Box Hill in the VFL, and then in the AFL.

"He was placed on the list in 2006 and a contract offer was made to him, but he chose to retire," Robson said.

"We then offered him part-time employment while he assessed what he wanted to do next in his life."

Khouri also stressed that Hawthorn would receive a summons for compensation within the next three weeks if any further offer was not forthcoming.

"A lot of his mates play soccer and he has been doing a bit of jogging with them," Khouri said. "I don't think he has any intention of taking up the game."

Lekkas is a friend of a South director and South coach John Anastasiadis was happy to include him in the senior squad's pre-season training program when Lekkas indicated he was looking at ways to stay in condition.

Pre-season training is more about fitness than ball skills and match practice and that has presented Lekkas with an easier way to blend into the surrounds.

He would be unlikely to walk straight into the first team if he decided to register with the club but his touch on the ball is reasonable and he is a natural athlete who would not find it hard to adapt if he stuck with the task.

South has reserve and junior teams which would be a more reasonable vehicle if Lekkas was just looking for fitness.

It's believed South hopes Lekkas succeeds at the club he followed as a junior before turning to Australian rules.

Lekkas' long-standing association with South Melbourne included a substantial donation when the club was trying to buy its way out of administration two years ago.


Nice to get a mention in the press but don't expect him to line up at the Village in Round One and smash home the winner against Heidelberg. The bit about how blows to the head could kill him is hardly compatible with a sport that consists largely of knocking a heavy object around with your head. But, let's milk that publicity while we can.
Posted by Paul at 19.1.06